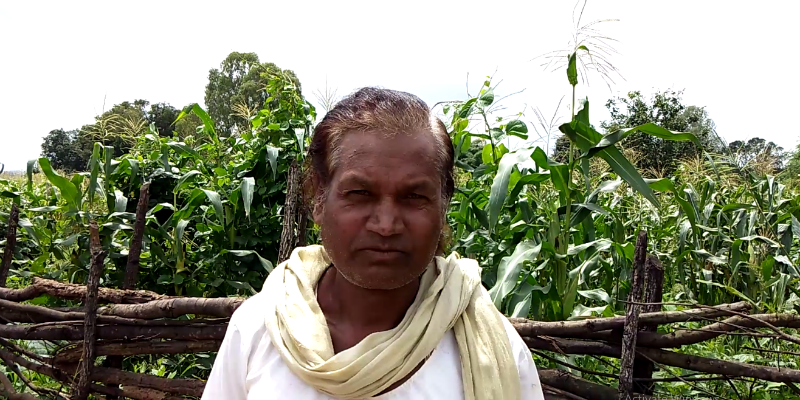 With increasing profits, farmers in Jashpur today do not think about quitting agriculture

Swayambar Ram Bhagat of Akrikona Village of Jashpur district in Chhattisgarh is a farmer. His family consists of eight members including six children and his wife. The produce from his fields was not giving any extra profit. He grew rice and vegetables on his land but he could not sell anything. It was not even enough for consumption at home. Sustaining livelihood through farming was gradually becoming more and more difficult with every passing day.

At times he would be compelled to think about alternative professions. However, he did not have any capital to start any new enterprise. Life was in doldrums. He did not know how he could escape that situation of helplessness.But today Swayambar Ram is a happy farmer who is leading a life of prosperity. The change in his life has been brought about by Sampann 40, an initiative by the district administration of Jashpur. Through Sampann 40, farmers are given the benefit of various schemes from various departments. They are also provided with better quality seeds and training on advanced methods of farming. A brainchild of Priyanak Shukla, the Collector of Jashpur, this initiative has been very popular among the farmers of the district.

When Swayambar Ram was introduced to Sampann 40 he saw a ray of hope. He is now taking benefit of the convergence of various schemes under the different departments like agriculture, horticulture, fisheries etc. “I am making a lot of profit now. I am even cultivating Jeeraphul rice which has given me at least 40 to 50 thousand rupees as profit. Similarly in the summers I grow tomatoes which gives me 80 thousand rupees. Earlier we could not even think about such kind of profit.” He says.

Swayambar Ram is now looking at a great future. He can now focus on providing quality education to his children. He hopes that his children will have a bright future ahead.Swayambar’s sons are open to taking up agriculture as their primary occupation. “They know that agriculture can also give very good returns and they are willing to become farmers.” He says.Swayambar Ram is also planning to expand his activities to get more profit. He is confident that with the support of the administration he can achieve his goals.

All the farmers in Akrikona are now reaping the benefits from Sampann 40. With the help of solar pumps they are able to irrigate their fields. The river Ib that flows by the side of the village is now being fully utilised for irrigation. All the farmers are using organic manure in their fields which makes their produce more saleable in the market. An NGO named Rural Education and Development Society has been roped in to teach the farmers about markets and marketing. Thus the middlemen have also been eliminated and the farmers are now directly selling their products in the market. The farmers now get all the benefit without having to give the lion’s share to the middlemen. Sampann 40 has helped them lift themselves out of poverty.