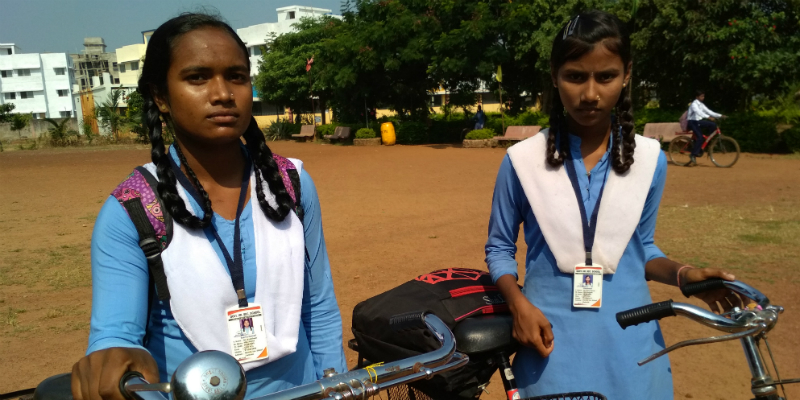 A girl who was almost forced to leave school due to long distance travelling hazards, is now able to reach school every day within a time period of thirty minutes daily. She is determined to study diligently and is seeking a job as a police officer after graduation, so that she can eliminate corruption and evil that are hovering the society. The girl under we are talking about here is Sima Nirmalkar of Sahetra village, who is studying at the government high school in Balod district of Jhalmala.

Sima’s father Kuleshwar Nirmalkar is a farmer and her mother Kirtika handles the everyday household chores. After her middle school education, Sima had to cover a long distance from Sahotra village to Jhalmala in order to study in high school. The journey was consuming as much as an hour’s time every day out of Sima’s precious time. Sima had almost decided that she would not study further and quit going to school because of the long distance between her Village and the other village where her school is situated. That is when she received a bicycle as a gift under the Saraswati Cycle Yojana of the Chhattisgarh government. Now it barely takes half an hour for her to cover a distance from her native village to the other village where her school is. Sometimes she even goes to drop her brothers Shailendra and Ravindra to school on her bicycle. She feels empowered to do so.

Statistically, the school dropout rate in the year 2000 in Chhattisgarh was more than many other states India in comparison. According to a study conducted in the year 2005-06, more than 20% students in Chhattisgarh dropped out of school at the secondary level. After this the government is taking several steps to stop students from quitting school. Saraswati Cycle Yojana is one of the schemes taken up in this regard. Seema is an example of how the scheme has benefitted the students. She was on the verge of quitting her studies due to lack of resources. Now she is attending school every day.

She says that she aims at studying harder in order to be able to join the police. She wants to become stronger so that she can teach lessons to hooligans and miscreants. She also wants to end social evils. Seema believes that all these factors are a hindrance for the development of women. Government's Saraswati Cycle Yojana is an effective step towards women empowerment. This boosts the confidence of girls. Now the girls are not dependent on anyone to commute to and fro their house. In fact, they even share family’s load in other household chores.