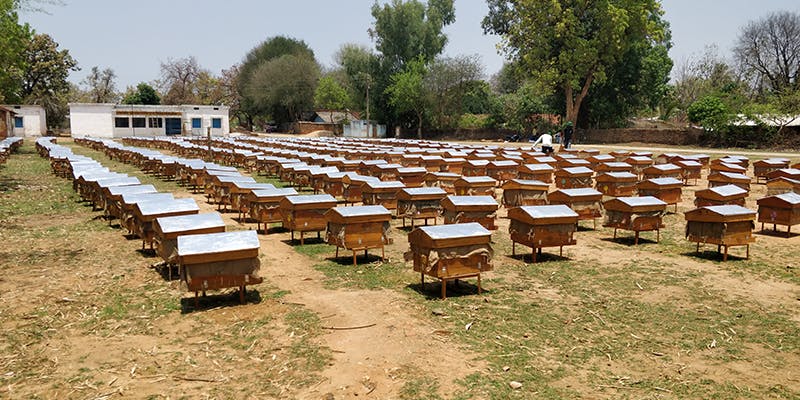 In a leafy compound in Chhattisgarh’s Dantewada, a large number of wooden crate-like boxes are lined up in an orderly fashion. These nondescript boxes are in fact, a prime example of community and industry and, the source for Bastar Honey, a brand of natural honey.

Set up over one-and-a-half years ago to propagate sustainable bee-keeping, today Bastar Honey plays a role in boosting the rural economy in the region, as well as in providing livelihood and financial stability to over 15,000-20,000 people; a significant number of them are women and tribal population.

According to beekeeper Ram Narendra, “Traditionally, after honey is harvested in the wild, the hives are burnt, which results in the bees being killed. Around six years ago, with help from the Chhattisgarh Council of Science and Technology (CGCOST), we started to train the honey hunters who went into the forests on how they could, instead, adopt environmentally-friendly practices, and save the bees instead of killing them. CGCOST also helped us with research on what kinds of crops and flora would be best suited to bring about good pollination and get a good yield.”

He adds that the district collector of Dantewada, Saurabh Kumar Singh, has played a significant role in the formal establishment of Bastar Honey, towards helping the economically weaker sections in the region. Experts from the Central Bee Research and Training Institute in Pune were brought in to train the locals in the intricacies of beekeeping, and today, the community handles over 450 beekeeping boxes.

While the bees themselves are a symbol of community, the beekeeping process is an extension of that, with over 200 individual women, 800 families from Dantewada, and around 150 families from Bijapur engaged in the end-to-end process -- from managing the boxes and extracting the honey to handling the packaging. The Bastar Honey team trains them in all these functions and gives them boxes to manage.

Each box is home to a colony of bees consisting of one queen and 10,000 worker bees. According to Ram, the bees are of the indigenous Cerana Indica species. “In a good year, we can get a yield of about 10 kg to 20 kg from one of these boxes. Collectively, the honey yield adds up to around four to five tonnes of honey per year,” says Ram.  He says, the bee farmers are paid Rs 300 per kg of honey.

Very recently, the Bastar Honey team began experimenting with the Italian-origin Mellifera species of bees, which delivers a higher yield of honey. “A box with this species can deliver up to 25-35 kg of honey per year, but they need more pollen and nectar. So CGCOST is helping us research the ideal conditions under which these bees can thrive,” says Ram. In the meantime, the Khadi Gramodyog, under the purview of which beekeeping falls, has given 78 tribal farming families 10 boxes of Mellifera bees each to manage.

The produce is currently marketed and sold by the Bastar Honey team, through distributors, and is also being made available on online channels.

Ram says they have adequate support from the district administration, which bears 80 percent of the cost of setting up a new box, which costs approximately Rs 16,000. According to Ram, their scope of work is likely to increase several-fold in the near future, and to this end, they are working on forming a federation.

“The boxes will be given to families who will be trained in the end-to-end process. Bastar Honey will buy whatever is produced and help market it. This channel will work for two years, following which the ownership of the boxes will be transferred to the people managing them,” says Ram.

Ram says, “We want to encourage the people to view this as a continuous source of income, even when there are low yields. Woh yeh kaam karte rahein, himmat na harein (They should not be discouraged by low yields but continue to work on this.) “

Ram mentions that during his recent visit to the state, Prime Minister Narendra Modi had tasted Bastar Honey, appreciated it, and even purchased some to take back with him. Another visiting dignitary, Niti Aayog chairman Amitabh Kant, tasted honey directly from the boxes and even ate a honey cake made by the women bee farmers. Whenever Chhattisgarh Chief Minister Dr Raman Singh visits Dantewada, he makes it a point to take back some of their honey, says Ram.