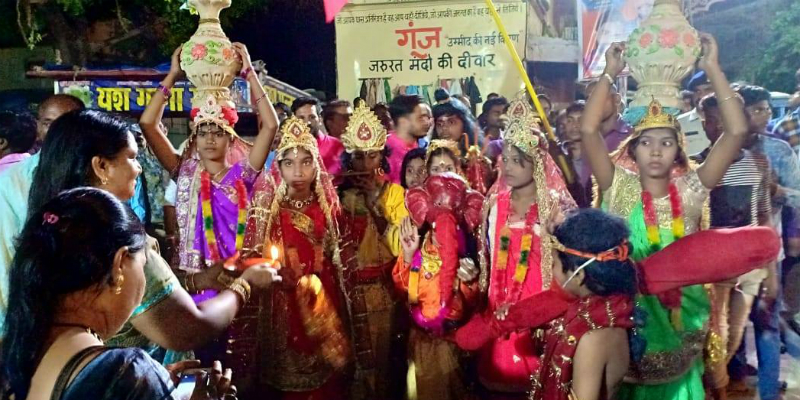 From Tackling Malnutrition of Children and Sex Ratio Gap to Providing Livelihood to Women, Chhattisgarh is doing some significant Work

When the chief Minister himself is a doctor, the State can never fall ill! The Health Department in Chhattisgarh has taken the responsibility of handling of poor health. But it’s the Women and Child Development Department that is working on providing nutritious food to malnourished children and pregnant mothers to fight diseases.

Not only this, this department has also taken up the responsibility of marrying off the girls from poor families. The task of providing skill training to women and making them self-reliant by giving loans to them is also being done well. If we look at child development, the biggest growth has been achieved in case of the Anganwadi centres. During the year 2003-04, there were 20,289 Anganwadi centers and 836 mini Anganwadi centers. In past 14 years, 46,660 large and 5,814 small Anganwadi centers have been approved. Initially, 17 million pregnant women and children were getting the benefits. Now this number has been increased to 27 lakhs.

Similarly, the Mukhyamantri Sandarbh Yojana was launched to lift the severely malnourished children out of the cycle of malnutrition. This benefited 6,33,139 children. In order to liberate the state from malnutrition, weighing festivals are organised for children up to five years Since 2012 to identify malnourished children. During this time, if there is a large population in a village, efforts are made to bring them to the normal level by providing food to children, and giving their families an understanding of the effects of malnutrition. Health of such 1,37,000 children has been improved. Due to these programs and schemes, malnutrition has decreased from 47.1 to 37.7 percent.

A drop-in malnutrition rate through dwarfism is 15.3 percent and the state has got the highest honor in the country to make it happen. An world bank project is being operated with the help of World Bank in 17 districts of the state. It includes Mahasamund, Korba, Durg, Kavdhada, Jashpur, Kanker, Dantewada, Kanker, Bijapur, Bastar, Narayanpur, Raipur, Bemetara, Balod, Sukma, Kandagao, Bemetara and Balaudabazar. Of these seven districts, Durg, Raipur, Mahasamund, Bemetra, Balod and Kavdhada have been distributing mobile phones to 8500 Anganwadi workers, and tablets to 330 supervisors. Nutri Clinic Center has also been set up to provide telephonic consultation to pregnant mothers.

This was just about health and nutrition. When looking at the other plans of the department, the government is making great efforts to make women self-reliant and self-independent and the success rate of this is also remarkable. Under the Beti Bachao mission, Raigad is included in the selected 100 districts across the country. Here the child sex ratio has increased from 918 to 934. Similarly, programs such as the Noni Suraksha Yojana, Mahila Police Volunteer and Mahila Jagruti Shivir are also being run.

On the other hand, women are getting themselves self-employed by availing the Rin Yojna from Chhattisgarh Mahila Kosh. In the same way, the Sakhi One Stop Center is being organized for atrocities on women so that the victim and distressed woman can immediately get the help and assistance under one roof. This scheme was started from Raipur district, now it is operating in 26 districts of the state. 2405 of 3569 cases so far have been settled in the state. In the remaining 966, the victims have been provided shelter.