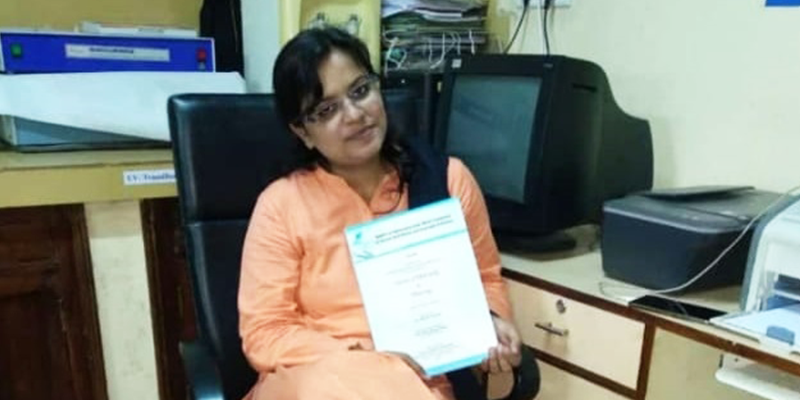 Research scholar from Chhattisgarh discovers molecule that could fight cancer

Curiosity and the drive to explore new things are the basic tenants of a researcher, and these traits can lead to life-changing discoveries and inventions. This same approach has led 28-year-old research scholar in Chhattisgarh’s capital Raipur to discover a molecule that she claims can fight cancer.

The molecule – the metal complex of N-aryl Hydroxamic Acid – can kill a large number of cancerous cells even in a very minute concentration, says Mamata Tripathi, a research scholar at the Pt Ravishankar Shukla University in Raipur.

As of now, Mamata, under the guidance of her guide, Professor Rama Pandey, who has retired from the university and is an expert in drug design, has successfully carried out laboratory studies, and started preparation to study the effects on the drug on small living beings like mice.

If these studies are successful, the molecule will be tested on larger living beings and may later be taken up for clinical research. Mamata carried out her research in association with Durga Femto Technologies, and a research laboratory in Bengaluru. “Initially, we cannot term the molecule as a drug, instead it is drug-like molecule. Results indicate that the killing power of this molecule, even in minute concentrations, is very remarkable,” explains Mamata.

For greater accuracy, the experimental outcomes were verified using software-based computational tools, she says. She adds that her guide, Professor Pandey had assigned her the work and her own curiosityled to the discovery. “I attribute this achievement to her,” says Mamata.

Speaking about her research, Mamta says that in 2001, research scholars from Pt Ravishankar Shukla University, in collaboration with Bhabha Atomic Research Centre (BARC) Mumbai, had started studies on 19 molecules, and have got remarkable results in two cancer cell lines - a breast cancer cell line, and skin cancer cell line.

The studies were carried out in-vitro (in a laboratory) as well as in-vivo (on mice) but were paused later. In 2013, Professor Rama Pandey has assigned Mamata along with her group to restart work on this topic.

“Our seniors carried out studies on normal Hydroxamic acid molecule, whereas we formed a metal complex of that molecule, and got positive results, in fact, better than previous results. Previously, our seniors carried out research on cell lines, whereas we carried out our study on the potency of molecule binding with RNA and DNA, and are planning to take the study further and find out its bonding ability with protein,” said Mamata, who is also an INSPIRE scholar.

INSPIRE, or Innovation in Science Pursuit for Inspired Research, is an innovative programme sponsored and managed by the Department of Science and Technology, Government of India, to attract meritorious students towards science.

The basic objective of INSPIRE is to communicate with the youth, create excitement around the pursuit of science, attract talent to the study of science, and build a critical human resource pool for strengthening and expanding the Science and Technology system, as well as R&D base.

A striking feature of the programme is that it does not believe in conducting competitive exams to identify talent at any level, but believes in and relies on the efficacy of the existing educational structure for identification of talent.