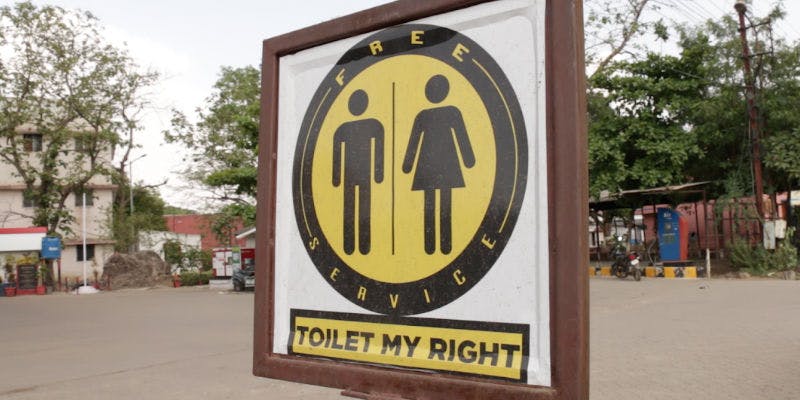 Has this ever happened to you? While shopping in a crowded market, suddenly nature calls and there is no clean restroom in sight. You spot a decent-looking restaurant and sigh in relief, only to be told that the restroom facilities are for paying patrons only. So you end up buying a coffee that you never wanted in the first place just so that you can access the restroom facilities at the restaurant.

It’s been almost eight years since the United Nations General Assembly recognised access to sanitation as one of the fundamental and basic human rights. But for large sections of the population in developing countries like India, the right to water and sanitation still remains out of bounds. According to a 2016 WaterAid report, India has the highest number of urban dwellers in the world (more than 157 million) without access to toilets.

While India continues to rank low on the global sanitation index, initiatives such as the Swachh Bharat Abhiyan are ushering in changes. According to government data, since the initiative was launched in October 2014, 52 million household toilets were built in rural India and the sanitation coverage went up from 39 percent to 65 percent as of November 2017.

As Chhattisgarh capital Raipur sets out on its Smart City journey, one of the key steps it has taken is to ensure that all its citizens can claim this constitutionally dictated right to sanitation. As part of this, an initiative called the Toilet My Right campaign was launched in August 2016, under which the Raipur Municipal Corporation has deemed it compulsory that everyone be allowed to access toilets and drinking water facilities at any public place, without any bias or questions being raised about it.

Under this initiative, the RMC has directed commercial establishments and public buildings such as restaurants, shopping complexes and offices to construct toilet facilities, if they already don’t have them in place, and ensure their upkeep and cleanliness, failing which action could be taken against them.

To give more teeth to this initiative, the municipal corporation also launched a website and app, and rolled out a two-phase implementation. In the first phase, the RMC leveraged the power and reach of social media platforms. So, any citizen could complain directly to the concerned authorities in case toilets in public places were not being maintained, were dirty or not present at all simply by tweeting/posting on social media, using the hashtag #ToiletMyRight, and mentioning the name and address of the commercial building/restaurant. The RMC tracked these complaints on social media, and took immediate action, within 48 hours.

The second phase is a community-oriented movement. Under this, all restaurants, hotels, government offices and malls were requested to put up signboards displaying the ‘Toilet My Right’ message, giving all citizens free access to restrooms. Whereas earlier, people who were otherwise not allowed to just use the washroom and instead made to buy something from the establishment or restaurant, could now freely use the facility. The initiative also discourages restaurants or shops from preventing certain people from using the restrooms due to social or class biases, and has asked them to keep access to restrooms open to everyone.

Under the Swachh Bharat Mission, the district administration of Raipur has been working to ensure that a majority of its citizens have access to toilets. One of these achievements has been the construction of 10,000 toilets in 10 days in households across villages of the Abahanpur development block in the district. This drive earned praise from the Union government as well.

The RMC is on the right track to making the city clean and healthy by ensuring that the people who live there, in association with the administration, are playing a key role in driving sanitation measures, giving them a digital platform to air their woes, and equipping all its citizens with the basic right to visit a well-maintained toilet when they need to.