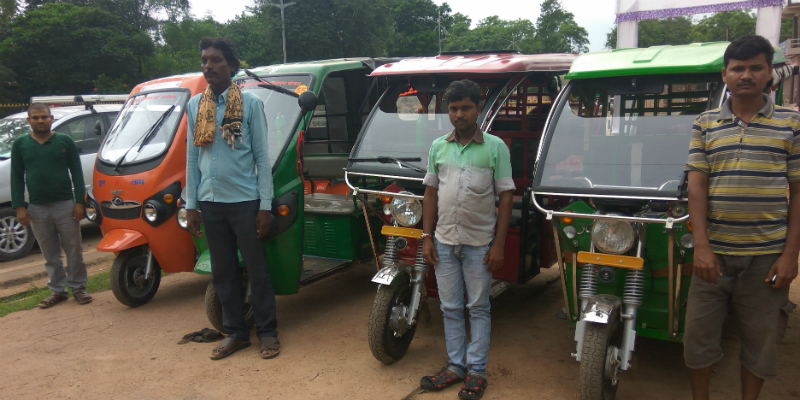 Durga Prasad Banjara rode the pedal rickshaw for about five years in the town of Kawardha. He used to earn 200 rupees after sweating out his day-long hard work. This amount was not enough to meet the needs of the family. He has his parents, two brothers and two sisters in his family.

Durga Prasad is married and his wife and a son also live in the house. Durga Prasad is the eldest among the siblings and because of this, the responsibility of managing the family also falls on his shoulder. Due to poverty, the parents could not educate them much. After teaching up to 8th standard, they were also asked to lend their hand in farming. His father has about one acre of land under his name and Durga Prasad initially began to help his father in farming on this land. Since the land is very small, it cannot earn them enough to run the family. Durga Prasad, along with his parents were forced to work as daily wagers in someone else’s fields.

Durga Prasad thought of doing a job when their financial condition did not improve even after working as daily wager. Since he was not well educated, he did not get a job. Seeing others, he bought a pedal rickshaw and the started riding it in the city of Karwadha. The money earned through it began to fulfill the needs of the family. But even after his day-long hard work, he could only earn 200 rupees. Sometimes he would get to earn around 300 rupees. Therefore, the family remained poor and despite his hard work the income did not increase much.

About four months ago, Durga Prasad's life saw a new ray of light. This light came in the form of a government scheme. This year, the Chhattisgarh government started e-rickshaw subsidy scheme for the poor people of the state. This plan changed the life of Durga Prasad. Under this scheme, the labour department provides subsidy on the purchase of e-rickshaw. The state government has been giving subsidy of 50 thousand rupees through the Labour Department to those who purchased e-rickshaws. Earlier, there was no provision for subsidy for e-rickshaw in any of the districts. In some districts, the subsidy was being given from the District Mineral Institute, but now the State Government is giving subsidy of one third of the total cost i.e. 50,000 rupees.

Durga Prasad took advantage of this scheme and became the owner of e-rickshaw. They have been running e-rickshaws for the past three months and now they are not earning less than 400 rupees per day. The important thing is that Durga Prasad does not have to sweat anymore because after getting e-rickshaw now he will not need to pedal with his feet. Durga Prasad says that because of the e-rickshaw, the people of Kawardha are also happy; this gives the passengers a lot of comfort and they are able to easily reach their destination in less time.

Many poor people like Durga Prasad took advantage of the e-rickshaw subsidy scheme of Chhattisgarh government and are moving forward on the path of progress.