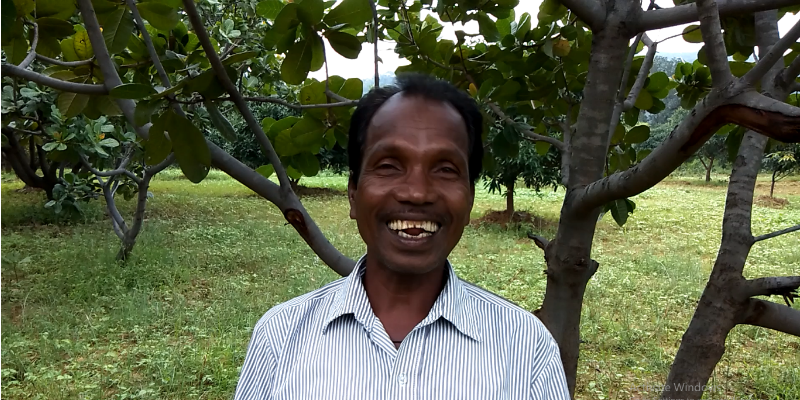 He had a dream of providing the best education for his daughter but it was not easy. But his barren land has been turned into a lucrative farm now. “My land was barren. It was of no use. There was not even a blade of grass on the land and therefore it was useless for me. But after I started growing cashew here, this has become my source of income and it is huge.” This is how Narayan describes the impact of cashew nut farming. Cashew nut farming has changed the lives of thousands of farmers in Jashpur and they are now leading a life of prosperity.

Narayan lives in Duldula in Jashpur district of Chhattisgarh. Five years ago he took up cashew nut farming after government officials explained to him the benefits. However, a lot of people warned him against it but he decided to go ahead. “When I started cashew farming, a lot of people warned me that it is a conspiracy by the government and corporate houses to grab my land. I did not listen.” He says.

Within five years his plantations yielded fruit. Narayan was initially selling it to brokers at a nominal price but with government’s intervention came more profit. He and other cashew farmers joined Farmers Producers Organisation and they could now sell their produce directly at the market without having to depend on the middlemen. He sells his cashew kernels at the processing unit set up by the district administration at Duldula.

Narayan’s conviction and hard work has been rewarded. His profits have doubled now and he is able to lead a prosperous life. He is now a prominent person in the village. “I could support my daughter’s education and she is the first graduate in the village. She has got a job too. I was also able to afford a lavish wedding for her. My son-in-law now stays with us and we are a happy family.” Narayan says.

Narayan’s success has encouraged others to think about cashew farming too. Those who had warned him against cashew farming have learnt their mistake now. “They regret not taking up cashew farming now. I had told some of them repeatedly to grow cashew but they did not listen. Some of them had planted some cashew but did not have faith in the prospects and their plantations were destroyed by animals. Now they are repenting.” He says.

Narayan is planning to expand his cashew plantations now. He is confident about a brighter future. Cashew nut farming is gradually changing the lives of farmers like him as well as the district of Jashpur.