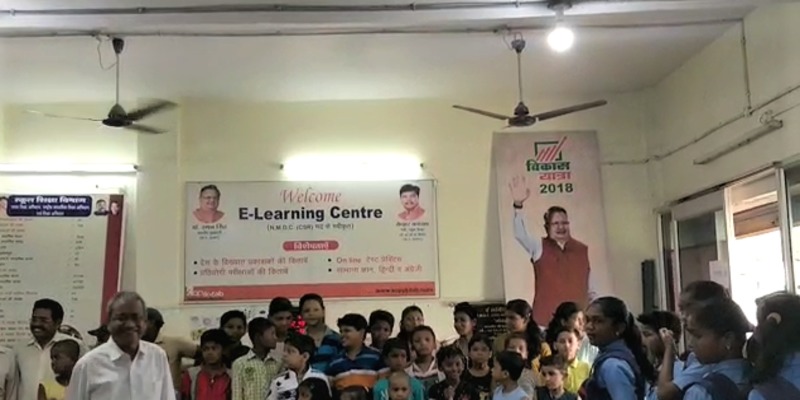 Bastar’s E-learning centre paves the way for a digital tomorrow, one child at a time

To ensure every student across the state is “digital ready”, the Government of Chhattisgarh launched the first free e-learning centre in Bastar district in 2015. This was possible because of a collaboration between National Mineral Development Corporation (NMDC)  under the Education board and Kopykitab.com.

Initially, the centre provided students with PDF material and online test material, but in the past three years, it has evolved and is now more than just an e-learning centre. In its second year, the faculty noticed that students were able to understand the concepts much better when they were provided with video content. To facilitate this, the team created a library of 1TB hard disk space, which includes additional material for students from sixth to the twelfth standard. Classifying content into standard-wise and subject-specific categories enables students to have easy access to what they are looking for.

The latest addition to the library is the Micro-Encarta software that helps students in Mathematics and Science. The centre also distributes digital content to six schools, which makes it easy for schools to get the best out of their digital labs. While the centre was initially aimed at just providing digital content to school students, in the past three years, it has expanded its offerings to include training in spelling and Phonetics for primary students, to grasp the basics of the English language faster, and prepare themselves for secondary education.

Currently, students travel as far as 35 km to attend the different programmes at the centre. It also caters to students preparing for competitive exams like IIT-JEE, NIT, SSE and PSC. The centre has 20 computers that help students get a first-hand experience of the digital content and online tests.Teachers from neighbouring schools volunteer at the centre.

The centre claims that than 10,000 students have enrolled since its inception.Though it began with very few students, the centre has seen the number steadily increasing over the years, aided by the quality of content and consistent support.The results have been promising with students achieving laurels in both academics and extra-curricular activities.The interesting and informative experience at the centre attracts the students so much that they frequent it even during their summer vacations.

“All this has been possible only because the centre was set up as an independent institution, which gives it the ability to provide access to the best possible guidance and material,” says Isaiah Vali the head of the centre.

Vali and his team plans to curate more content in the future, which can be distributed among more schools.