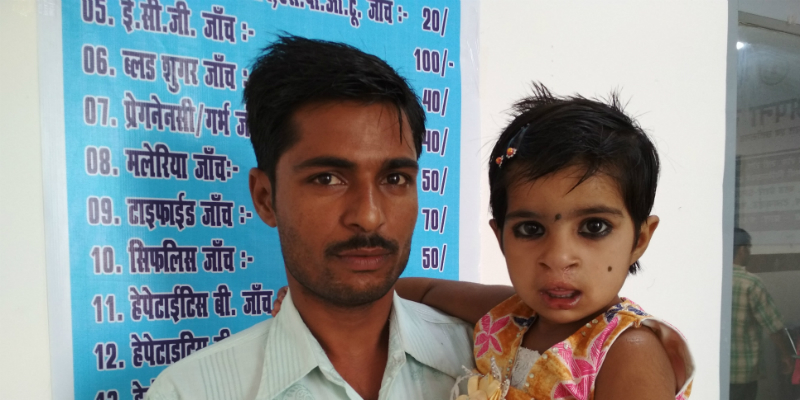 After the surgery of lip and palate, Maiya’s parents are relieved to see her smile again

The family was frightened when Maiya was born with a mutilated lip. Their happiness faded away, seeing their daughter in such a condition. No one was able to say or understand anything, but the doctors of the government hospital explained to them. They were told that this can be treated and the government has also made schemes to help such treatments.

A few days later, NGO Smile Train TRY helped them. Her plastic surgery took place in Raipur. Dr. Sunil Kalra successfully performed the operation. Maiya is three years old today and her family members feel relieved seeing her smile every day. This story is about the family of Ramraj Chandrakar, who lived in Kadrdha's pandalika. He has four daughters, Radhika, Ragini, Maiya and Satvati. This incident happened three years ago. When Ramraj's wife Nandini suffered from labour pain, Ramraj was not at home. The rest of the family was in the hospital with her. All were waiting for the delivery to happen.

The sound of a crying baby came from the operation theatre. Nurse informed that it’s a daughter, but she does not have a palate and her lips are also cut. When the family saw the condition of the child, they were gravely disturbed. Ramraj was also informed about this matter. He also reached the hospital. In fact, he even lost his consciousness after seeing his daughter. The family members somehow took care of the situation.

To find out a solution to this problem, all the Pandarias visited a doctor from the government hospital. The doctors reassured that there is no need to panic. He told them that there are experts in such cases and your daughter can be completely cured. Doctors also informed about the government's scheme for such children and that after surgery, their daughter will become completely normal. Doctors’ assurance gave relief to family members. But Ramraj still couldn’t pacify himself. He continued visiting the hospital every now and then. He kept visiting the government hospital in order to fetch more information. He kept enquiring about the address of the experts.

Smile train try NGO helped Ramraj in this surgery. They checked up Maiya. They took up the case to plastic surgeon, Dr. Sunil Kalra. He explained the entire procedure and gave them a date when he would conduct the surgery. They did an operation. Like always, this operation was also  successful. After surgery, Maiya’s lips have been fixed. Ramraj says that the government helped him in every way possible. He keeps praising Dr. Kalra. He says that Doctor Kalra retained the beauty of his daughter. What could be a bigger reason for their happiness!

Medical science uses the term Cleft Lip for this disease. Doctors say that it is congenital. One out of every 700 children in the world are born with Cleft Lip. But the common man cannot afford its surgery. So, in Kabirdham, the government has worked through the action plan. Cases of cataract, club foot and cleft lip were created in the hospitals of Kawardha, Bodla, Pandaria and Sahaspur Lohara and campaigns for the same were launched. Today, many patients of mutilated lips, club foot and cataract have been treated.