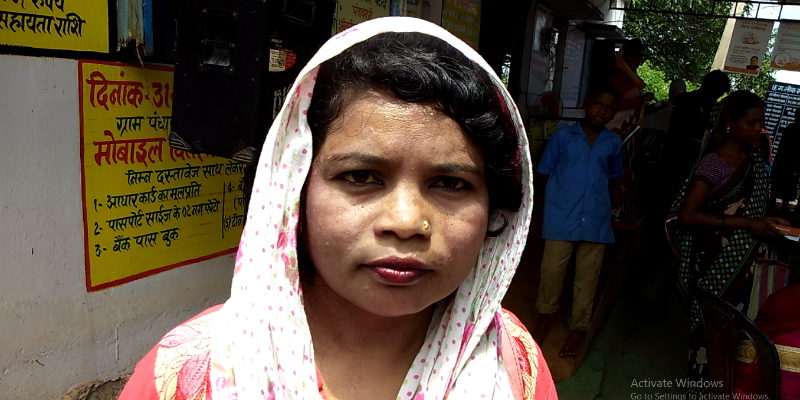 A smartphone and internet connection in hand, Chhattisgarh's Shanti Devi says empowerment is at her fingertips

Raising two teenage daughters is not very easy for a widow with low income. Shanti Devi had to work very hard to look after her family after her husband died. She works as a health worker in Ambikapur of Surguja district in Chhattisgarh. Her eldest daughter is 17 years old and the youngest is 14. Shanti is one of the beneficiaries of the Sanchar Kranti Yojana or SKY, an initiative by the Chhattisgarh Government.

Under this scheme she has recently got a smart phone. It is the first smart phone she is using. She had never thought of getting a smart phone for herself because it was costly. The money she earns can barely meet the expenses of her family including the cost of education for her daughters. But now that she owns a brand new smart phone, she has a lot of plans for future.

Shanti never used a smart phone earlier but she is well aware of the benefits of smart phones. She has no doubt about the positive changes the smart phone is going to bring to her life. She is excited about her new phone and she is learning the usage fast. “I am still not used to it but I will finish learning all about it in a few days. The phone will help me solve the problems of a lot of people more efficiently. For example when I have to deal with some illiterate people this phone will be very helpful because I can explain things to them with video calling or photos and videos.In the same way people can also communicate with me more efficiently about their problems. This will be very helpful in solving problems. Also, when you explain something with pictures and videos, people learn it more easily. It is more efficient learning tool than plain words.”
She says.

Shanti thinks that her smart phone will also be very useful for her eldest daughter who is learning computers. “She often tells me, ‘It would be helpful if I had a smart phone.’ Now she can use it too. It will help her to learn many new things about computers.” She says. The internet is going to open new windows of learning for both of her daughters.

The doors of opportunities that the smart phone is opening for her has given Shanti a deep sense of empowerment.  Being able to solve people’s problems more efficiently and being able to explain things in a clearer way gives her more confidence. She feels she can work better now. Being able to provide a learning tool to her children also gives her a sense of satisfaction. She feels that the coming days will definitely be better for her and her family because of the smartphone.

“It makes life easier. I am happy to get this smart phone. In today’s world it offers you many opportunities. You can also benefit from various government schemes when you have the smart phone and internet connection in your hand.” She says.