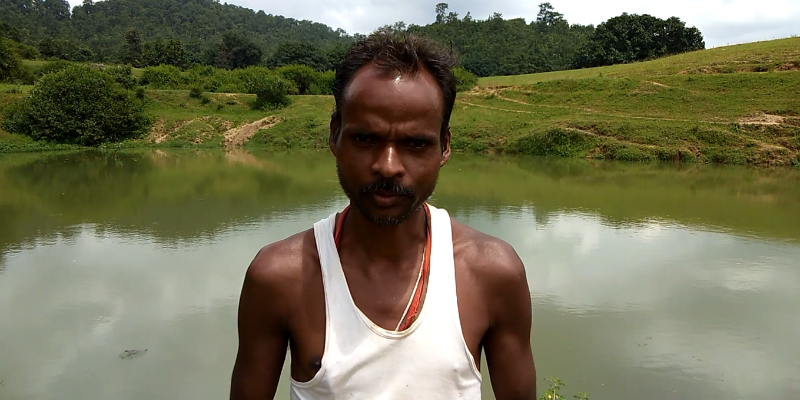 Sukhdeo Ram of Akrikona Village in Jashpur district of Chhattisgarh had never been able to earn profit from his agricultural field. It was not giving him much yield as he was following traditional agriculture methods. Lack of irrigation facilities was also a cause of concern for him and other farmers in the village. Despite the presence of a river, the farmers had to face dearth of water.

Sukhdeo’s family consists of him, his wife, three children and his parents. His family could not be supported by the earnings made from his field. But today his condition has changed owing to an initiative by the district administration of Jashpur. It is a unique convergence of various schemes by different departments like agriculture, horticulture, fisheries etc. The initiative named Sampann 40 has changed the lives of many farmers in the district. The farmers like Sukhdeo in Akrikona village are also positively affected by Sampann 40. When resource persons from various departments introduced farmers of Akrikona to the benefits of Sampann 40.

Sukhdeo got involved in Sampann 40 because he saw it as an opportunity to change his life. After getting involved with Sampann 40, he got training from the experts about advanced methods of agriculture. He is also growing wheat and vegetables. There was a pond on his land. With the help of the fisheries department he converted it into a fishery. “Now I am cultivating vegetables of various kinds. I am also growing fish in the pond which was unused. I am now making a good profit out of it. I had got wheat from the agriculture department. That is also giving me profits. There is a farm pond on my land and I am growing tomatoes and other vegetables beside the pond.” He says.

Sukhdeo is confident of making more profit in the future. He is enthusiastic about his association with Sampann 40 and he wants to continue it. “Sampann 40 has indeed changed my life. Because it has given me profit from agriculture which would have never been possible otherwise. Farmers like me have been immensely benefitted from Sampann 40.” He says. Sukhdeo's children are all studying in college. They are interested in taking up agriculture as their profession in the future. They are confident that it can be a lucrative source of earning. “My children want to become farmers. They believe that they don’t need to think about any other profession if they take up agriculture properly.” He says.

Sukhdeo and other farmers of the village have no doubt about the growth prospects in agriculture with the help of Sampann 40. They are grateful to the district administration for the initiative. It is a unique experiment that has succeeded and is an example of efficient convergence of various government schemes to achieve a common objective. This is a model which can be adopted in other parts of the country as well. It may be a solution to many of the problems faced by farmers all over the country.