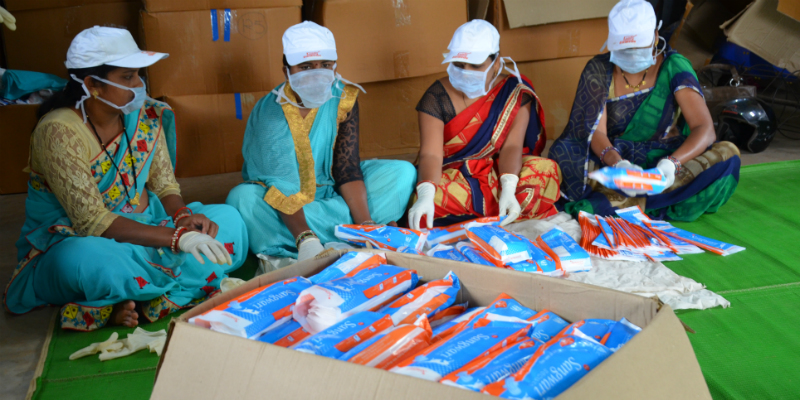 With ‘Chuppi Todo’, women in RajnandGaon are eliminating stigmas attached with menstruation

Dhaneshwari Sahu is a 35-year-old woman. She lives in Rajnandgaon with her husband, Danesh, and three children. Her son is 18 years old and studies in 11th standard. One of her daughters is 14 years old, who is in 10th class and second daughter is 12 years old and is studying in class 8th.

Dhanesh works as a security guard in a hospital. His salary was not good enough to support the family. Somehow, the family was trying to get their children educated. Her husband earned 5-to-8 thousand rupees per month. If needed, he used to go to the farm to work as a daily wager. Dhaneshwari is associated with a women's group, so she got to know about the sanitary pads awareness campaign through the Vihan Group. She also came to know that by branding the sanitary pads, she can earn a living. She joined the mission and eventually started helping her husband in running the family. She also joined the campaign. While packaging the sanitary pads, she started giving away the sanitary pads to women and made them aware of its use. Out of one sanitary pad packet worth 22 rupees, 2 rupees would be earned by the women of the group. Through this, Dhaneshwari started earning an extra income of 8 thousand rupees in a month. Their financial situation improved. Similar is the story of many other women, who are engaged in making other women aware.

Some time ago, a movie named "Padman" was released. The person, whose activities inspired the idea for this film was Tamil Nadu's Arunachalam Muruganantham. Many women of Rajnandgaon are doing what he did; trying to change the mindset of people towards menstruation by spreading awareness and bringing awareness towards this. These women are running the Chuppi Todho Abhiyan. The campaign, which not only helped remove the misconceptions about  periods in Rajnandgaon and to adopt cleanliness in the meantime, but also to sensitize the entire society with full awareness. Not only this, the result of this campaign is that the main source of livelihood of a large number of women has become sanitary pad now.

It is indeed the result of such campaigns that Rajnandgaon has received achievement under the Swachh Bharat Mission. Initially the district was very backward with the idea of using sanitary napkins. After this, awareness camps were organized in the village panchayats and urban areas. Then, awareness campaigns started via different mediums, beginning from remote areas to city and even cinema halls. The film Padman was shown to the ladies. That is when the women learnt what actually a pad is.

Women's self-help groups got loan on the basis of government's schemes and this is how they are ordering for sanitary pads from Nagpur. They are themselves branding it, which has given them a means of employment. Loans are provided to these women groups under the schemes of NRLM and Women and Child Welfare Department at cheap interest rates. This amazing campaign of cleanliness is still continuing.