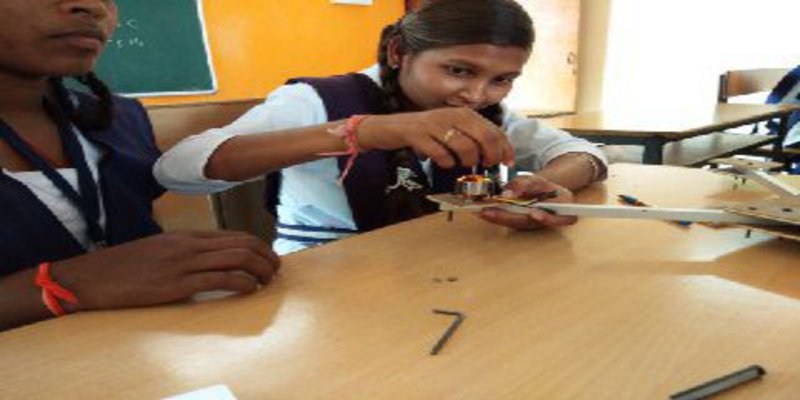 Chhattisgarh’s tribal-dominated Dantewada district, famous for its natural beauty, is now leading the state in technology innovation, as around 800 students from government schools are learning to make drones. The district administration recently conducted a workshop to acquaint students with the technology and the working of drones and instead of restricting to just pen and paper, and instead, students were taught to make a working model.

There was a high level of enthusiasm and excitement as students demonstrated their drone as it took flight. The workshop, part of the government’s ‘Udaan’ project, was conducted by Raipur-based startup Aviorone Technologies, which is incubated by 36INC-Incubation Centre of the Chhattisgarh Government.

The first edition of the workshop had participation of around 400 students from classes 9th to 12th belonging to the Palnar village in the Kuakonda block. Seeing the response from the workshop, it was taken to other regions, covering nine higher secondary schools and reaching 800 students. The four-day workshop sought to make government schools students technically sound, and to introduce them to modern technology with interactive learning. Of the 800 students, about 300 students were girls from the Girls Higher Secondary School, Jawanga.

“The objective of the workshop is to get students familiar with modern technology because they go to bigger cities for higher studies, or for a job, such technologies should not be new to them. The aim of the workshop was to make students familiar about modern technology, where they displayed active participation towards learning. With this interactive method, the students easily learned about mathematics and principles of physics,” said Dantewada Collector Saurabh Kumar.

He explained that to make a drone, students had to take measurements, which taught them mathematics and measurement. Similarly, when they learnt circuits to make the drone and how it flies, they learned electronics and the principles of physics. The drone workshop explained the concepts of design, testing and fabrication to students, with practical sessions and eventually, the students made a drone and demonstrated its working, the collector added.

The district administration spent Rs 1100 per student that participated in the workshop. The material cost of a drone was Rs 20,500, he said.