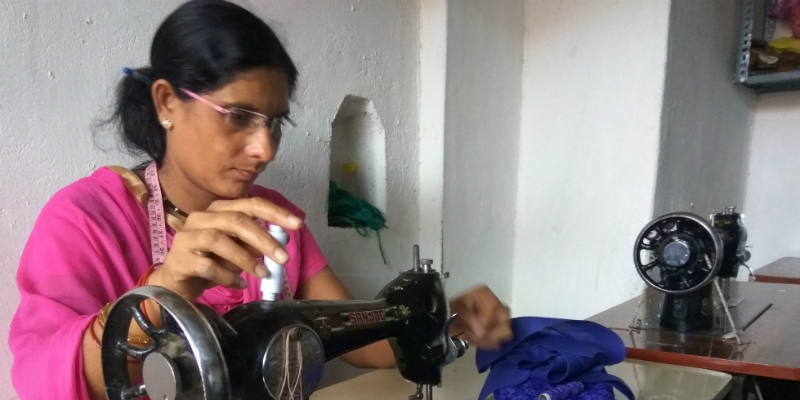 Naseem has three children. There was a time when it had got extremely difficult to run the family and home. Husband's income was not enough for the needs of family and home. Naseem also worked as a domestic help in other people’s house for the upbringing and good education of her children. Because of Naseem’s lack of education, it wasn’t very easy to get a job either. But Naseem never ever gave up, and she never stopped working hard.

With the hope of improving the future of her kids she continued relentlessly. Back in the days, she had learnt how to sew. Owing to her skill she could take up some sewing work for extra money. She bought an old sewing machine and took up some sewing work. She started sewing salwar, shirt, kurta-kurti, etc., for girls and women. This made her earn a lot of money.

She was happy because of the fact that she was doing a respectable job and that there wasn’t any need or compulsion to work at someone else’s place as a domestic help. The financial condition of the family was slightly better now. Meanwhile, she got to know that the Chhattisgarh Government is providing free of cost training in stitching to women. Naseem saw work prospect through this training also so she underwent the training in tailoring and learnt new ways of sewing different clothes.

During the training, she was told that under the Mukhya Mantri Sangathit Sahayta Yojana, she will get a sewing machine absolutely free of cost, like a gift from the Government. At first, Nasim could not really believe it, but when she actually saw a free new sewing machine in front of her, provided to her from the Chhattisgarh Government, there was no limit to her happiness. After this, Naseem expanded her sewing work faster, due to which her income also increased by leaps and bounds. As the days passed, Nasim's enthusiasm grew, and her self-confidence increased.

Nasim further started giving training in tailoring and sewing to other women of the neighborhood. Slowly and steadily she also started buying new sewing machines one after another, and today she has a total of five sewing machines at her disposal. Some women do sewing related work with her, whereas other women learn sewing from her. Naseem is now earning 10,000 rupees just by sewing. Her elder daughter is a student in a nearby college and she also teaches to school children. Both of Naseem’s sons are studying in school. Naseem's is now happy in her life and is progressing faster than she ever did or could have even imagined. Even her family is a lot happier and comfortable than before.