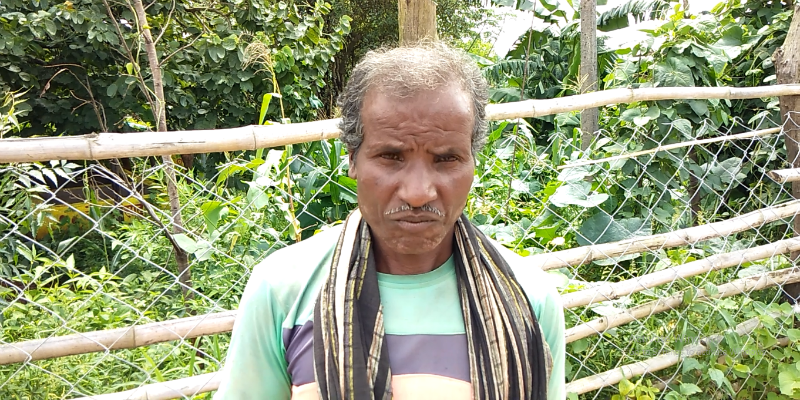 This farmer is improving his lifestyle through cultivation of vegetables

Basiya Ram Bhagat is a farmer who lives in the Akrikona Village in Jashpur District of Chhattisgarh. Farming was never a viable option to support his seven member family. All the crops he grew in his fields were not even enough to fulfil the needs of the family. His eldest son became a mason and the youngest son became a driver to earn livelihood. Despite being born in a farmer’s family they could not consider taking up agriculture as an income opportunity because it was not viable.

Basiya Ram had been using traditional methods of farming and therefore the production was not enough. Moreover, the dearth of irrigation facilities was also a major drawback. Despite the presence of a river in the village, the farmers were not able to utilise water in their fields. However, Basiya Ram and his family is now heavily dependent of agriculture. In fact, agriculture has changed their lives. “I have recently bought a motorcycle. I am also planning to buy a four wheeler.” He says.

The turnaround in Basiya Ram’s life has been facilitated by Sampann 40, an initiative by the district administration. The focus of Sampann 40 is the convergence of various schemes by different departments. The objective of Sampann 40 is to multiply the income of the farmers in rural areas through the help from different departments like agriculture, horticulture, fisheries etc. The farmers are informed about how they can take benefit out of various schemes of these departments. They are also given better seeds and training in advanced methods of farming. They also get infrastructural support. All these schemes are synchronised to achieve the common goal of increasing productivity. The farmers are also provided with marketing support. For this purpose the government has roped in certain NGOs too. They provide marketing knowledge to the farmers in order to increase their profit.

When Basiya Ram learnt about the Sampann 40 and how it can benefit farmers, he decided to get associated with it. It has helped him increase his profit manifold. Earlier he was producing crops for home consumption. Today he is producing chilies and tomatoes on commercial basis and is making significant profit. It has lifted him out of poverty and has helped him become a prosperous farmer. “My sons were compelled to take up other work because farming had no profit. But now things have changed. My sons are now taking interest in agriculture again. It happened just because of Sampann 40.” He says.

It is not just Akrikona where Sampann 40 have brought about changes. There are many villages in Jashpur district where the farmers are now leading a life of prosperity and financial freedom. Sampann 40 is a successful model that can also be implemented elsewhere. Agriculture has been a very important aspect of Indian economy. But the condition of farmers in most parts of India is not satisfactory. The initiatives like Sampann 40, if implemented properly, can prove to be a viable solution to most of the problems faced by farmers in various parts of the country.