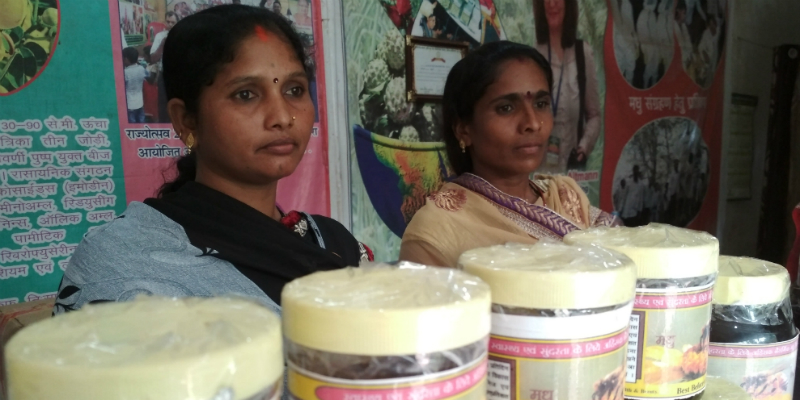 The town of Kavardha is situated in the village of Joratala. Initially, the women of the village used to work as daily wage earners. They used to go to the farms and work there. Sometimes they used to get work and earn wages, and most of the time, they used to return home empty-handed. They wanted to help her husbands in supporting and providing for the family, and improve their poor economic condition, but were not able to do it.

Then these women were informed about the Aatma Yojana of the agriculture department. With the help of this scheme, they created a Self Help Group of women from their village. This group decided that they would do organic farming and would buy horticulture and forest produce crops. They were determined to reach out to the people in a new way with this product. They processed it and prepared ice creams and juices. They packaged these products and made it available to people at cheaper rates. The local administration opened an outlet for them near the district panchayat, so that people could reach out to their products. Now their natural and biological products are beginning to be appreciated. Now these women have not only become financially strong themselves but they have also earned respect.

Women of Joratala handle their own outlets near the Zilla Panchayat. Products related to local biodiversity, agriculture, horticulture, small forest produce are found here. They have developed an entire series of these products. Sitafal Ice cream is their most famous product. They also sell juices made of Tulsa. Agricultural officer NL Pandey explains that Tulsa is described in Ayurveda and is in deamnd. Their juice products, such as Tulsi and bamboo, are now seen giving a tough competition to carbonated drinks found in distance places. These women make nectar-equivalent beverages, which contain essential nutrients. Pure honey is also easily available here. The farmers were trained to extract pure honey from the forest. Experts were called from Wardha and taught the farmers how to extract honey. The honey released from the forest trees is sold here after refining.

Women have progressed under the Atma Yojana. Along with the agriculture and horticulture products, the processing, marketing and value-added scheme was also developed, which is benefiting these women. Initially, their livelihood was limited to their house. They used to work as daily wage earners. But now their lives have changed. Till now, these women have attended National Food Processing Fair from Raipur, Mandla, Nagpur to Goa. After going there, they understood how good the situation of food processing is in the country. After seeing all this, they can see their own bright future now. They have also started processing Kodo-Kutki and are now preparing Idli from Kodo.

This is not only the only women's SHG in the district. There are more than 2084 women self-help groups in Kabirdham district. These women have gained strength on their own. Schemes of Chhattisgarh government helped them move forward. Looking at these successful women groups, the other groups are also doing their best to keep progressing.