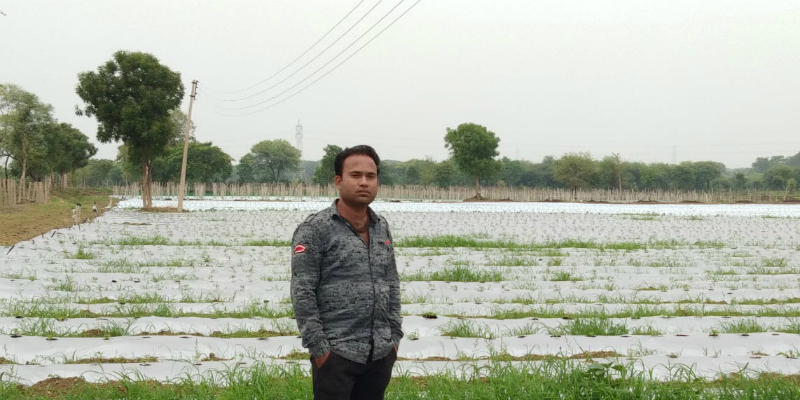 Rajesh Patwa is a rural farmer in Kurubhat village of Ranka village Panchayat in Dongargarh block of Rajnandgaon district. Rajesh has stepped up his economic progress by using various techniques in agriculture and by changing the methods of farming. Rajesh’s work is an example of growing financially strong through cultivation. There was a time when Rajesh used to grow traditional crops. But, he also had to bear the loss incurred through it.

Sometimes even the cost of the crop was too difficult to get back. But Rajesh’s days have changed for good. He has been able to change his life with the help of government's scheme, under which he could bring about changes in farming through financial assistance. Since his village was the selected one under the Rurban Mission, he also benefited from it.Rajesh is cultivating 2.266 hectares of land. By adopting drip irrigation, he has created a way out for the neighbouring farmers. The Rurban Mission was started in the year 1996 in Village Kuruvath of Dongargarh Block of district Rajnandgaon.

According to the scheme, all the departments were to work in collaboration in order to provide benefits to all the villagers. Rajesh Patwa was encouraged to take on the advanced agricultural work on the 2.266 hectares of land belonging to his father Itwari Patwa. 1.282 hectares of the land was utilised to set up drip irrigation. And the quotation amount of 1,00,580 rupees was fixed at 1.200 hectare for drip irrigation. In this way, the total grant amount 1,51,048.8 was given. A drip irrigation plant was set up in his farm through this amount. Earlier the farmers were unable to take advantage of advanced methods of agriculture due to lack of proper irrigation facilities. But now there has been an increase in crop production on the same land.

Following the establishment of the plant under the Rurban Mission, the former horticultural technical departments led Rajesh to turn away from traditional agriculture to commercial agriculture. He has increased his income by 3-4 times every year by producing 3-4 times a vegetable crop in a single plot per hectare. Earlier, paddy, wheat, gram, mustard production used to give him just 65000 rupees. But now the cultivation of vegetables like bitter guard, cucumber, chilies, tomato, string beans, and brinjal gives him a profit of 1,45,000 rupees. Crop rotation, crop concentration and the right amount of water at the right time were responsible for increasing the vegetable production.

Drip irrigation saved water and saved wages and the income increased. Apart from selling the vegetables in the local market Rajesh also sold them in Gondia and Amgaon city. It gave him a profit of 2,550,000 per hectare of land for bitter gourd and cucumber and 2,55,000 per hectare of land for tomato. Under this scheme, his financial condition became better than before. Now he has even started organic farming in the area.

He is now a role model for many other farmers who are inspired to increase their incomes with the help of modern methods in agriculture.