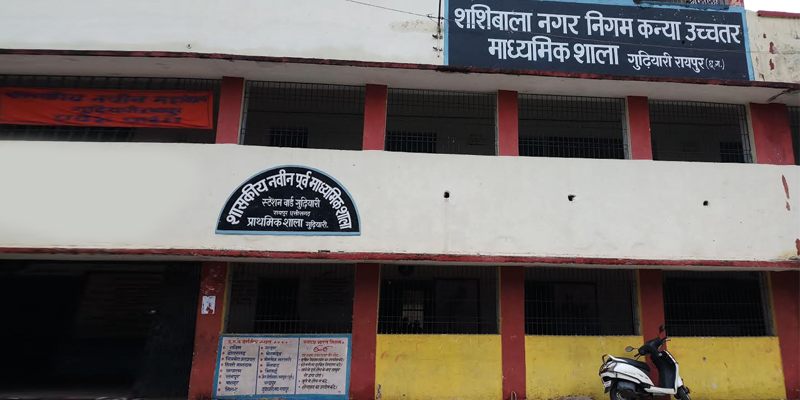 There is a strong mindset across the country that municipal schools do not provide high quality education to their students.

The Naveen Primary School, established by the British administration in 1939 in the densely-populated locality of Gudhiyari in Chhattisgarh’s capital Raipur, along with other municipal schools in the city, will aim to become the model for government schools across the state with a major education transformation.

The Naveen Primary School has around 240 students enrolled, and the number of children attending the middle and higher secondary schools in the same campus is even higher.

The ‘Teach for Raipur’ campaign, launched under Raipur Smart City Limited (RSCL), will ensure the participation of educated citizens as volunteer teachers to resolve the problem of shortage of teachers. As part of the campaign, the Raipur civic body will ensure remedial as well as gap-filling classes in 13 schools operational under it.

“Brilliance, innovation and excellence are not the exclusive domain of children studying in private English medium schools. Students of Hindi medium municipal-run schools are equally capable of giving remarkable results if proper teaching and guidance is provided,” said a group of commerce students about the campaign.

Teachers at the schools say the students are excited about the campaign and are looking forward to the new academic session which will be part of the ‘Teach for Raipur’ campaign.

With the campaign, municipal schools, which have the distinction of producing many IAS and IPS officers, engineers, doctors and businessmen, may regain their lost glory such that people will not hesitate to enrol their children in these schools, said Rakesh Kannauje, Headmaster of Government Naveen School.

The campaign is expected to enhance the average literacy rate of Raipur, which was 75.56 percent according to the 2011 national census, Kannauje added.

Realising that government schools could play a significant role in enhancing the literacy rate, Raipur Municipal Commissioner Rajat Bansal has chalked out the ‘Teach for Raipur’ campaign to tide over the issue of teachers’ shortage, and guarantee every child’s right to good quality education by bring in active participation from highly educated members of the society.

Classes under the initiative will most likely start from July, and proper gap-filling classes will be started from next year, said Commissioner Bansal, adding that the move will bring significant change in the education system. “While undertaking inspection of RMC’s schools and interacting with teachers, shortage of teaching staff came to fore, which had an impact on the quality of education. Immediately, after countering the issue, gap analysis was carried out, and this provided a figure of around 51 teachers (lacking in these schools),” said Commissioner Bansal.

He elaborated that the process of hiring teachers was lengthy as several government bodies were involved, and a solution needed to be found at the earliest and this led to the decision to involve volunteers.

As of now, over 200 people have volunteered to teach in schools, he added.

He explained that when a volunteer approached the civic body, their enthusiasm was high, but regularity was an issue. “It may be possible that people may quit after participating in one or two classes, so it would take some time to target and identify those volunteers who will continue with us for long in the interest of students,” he said.

The municipal corporation is listing volunteers, who will then undergo a training carried out by the Azim Premji Foundation and experts. Initially, the government is not planning to start gap-filling classes, and remedial classes of one hour each after the regular school timing of 8 am to 2 pm will be held, which will be highly interactive, the commissioner said.