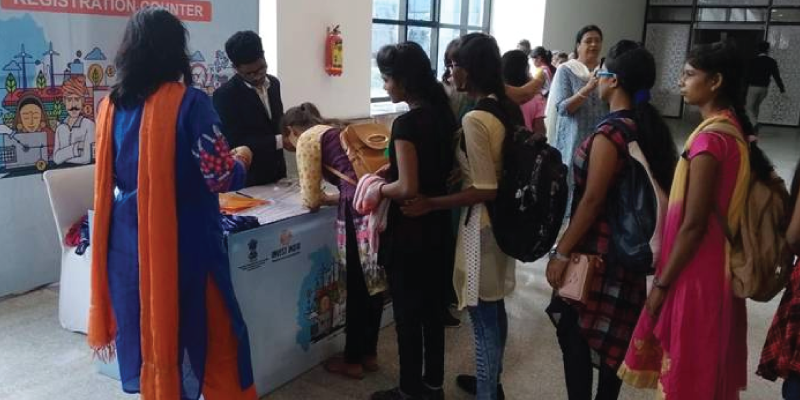 Startup India Yatra gets rolling in Chattisgarh, boosts entrepreneurial dreams from the hinterland

A large number of students thronged to the first Startup India bootcamp in Raipur on July 30, indicating how entrepreneurial dreams among the youth are not limited to the metros.

The bootcamp was organised as part of the launch of the Startup India Yatra in Chhattisgarh after the first leg in Gujarat, Uttar Pradesh, Odisha, Uttarakhand and Madhya Pradesh. In Chhattisgarh, the yatra will make its way to key cities such as Bilaspur, Raigarh, Dantewada, Kanker as well as travel to remote areas such as Korba, Koria, Surguja, Jashpur, Balodabazar, Durg, Rajnandgaon, Balod, Dhamtari, Kondagaon and Jagdalpur.  The bootcamps will be held in government engineering colleges and polytechnic institutes in the respective cities and towns.

These bootcamps aim to promote job creation in tier 2 and tier 3 cities and towns and offer aspiring entrepreneurs lessons on business planning and how to start up .  The bootcamps also feature presentations on Startup India and the Chhattisgarh Startup Policy and include intensive ideation workshops. This is followed by a pitch fest where the participants can submit their startup ideas, and shortlisted ideas get a chance to be incubated in the state run incubators.

The only criteria to participate in the yatra is that the aspiring young entrepreneurs have to register on www.startupindiahub.org.

At the bootcamp in Raipur a brochure on Startup Chhattisgarh Yojana was released. The Startup Chhattisgarh Yojana was launched in 2016, under which the state government offers several incentives for startup entrepreneurs and supports the growth of the startup ecosystem in the state.   In a span of less than two years, 3,800 ideas were submitted, of which 125 ideas have been selected to be registered and supported under the Startup India programme. The state government has also launched a website www.startupcg.com for this. So far, a total of 19,000 students across 40 districts in five states have benefitted from the Yatra, with over 90 startups and entrepreneurs receiving grants or incubation offers from the respective State governments.

The Indian Government’s Startup India initiative envisages building a robust startup ecosystem in the country for nurturing innovation and providing opportunities to budding entrepreneurs. In tandem with this mission, the programme has been able to gather registration of 10,999 startups, generating employment to 1,09,869 people, according to the official press release.

In Chhattisgarh, the Startup India Yatra will further boost entrepreneurial talents in the state by giving aspirants from rural towns and cities access to important elements of the ecosystem.