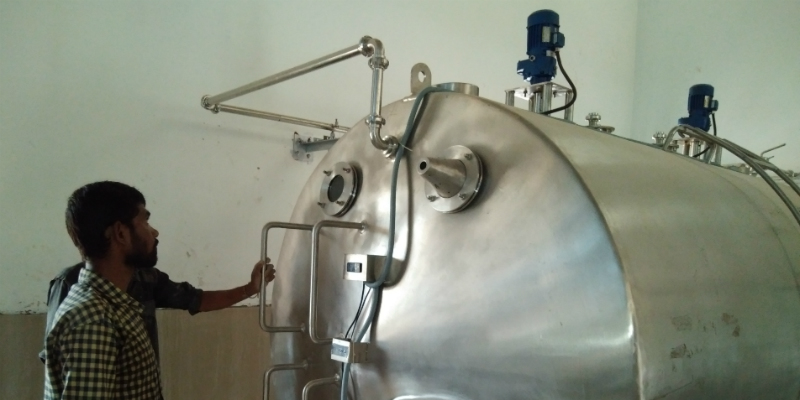 Silphili in Surajpur District of Chhattisgarh has been a hub of milk farming for a long time. Many people here have been involved in milk farming from a long time. But for a number of reasons milk farming has not been so lucrative in the recent times. To give an impetus to these milk farmers the district administration has set up a milk factory which will provide a market for around five hundred to six hundred families in 10 kilometres of radius around it. The factory will initially process 1000 litres of milk a day. Gradually the capacity will be raised to 10,000 litres phase by phase. The milk will be packaged and sold under the brand name of Pilkha Ksheer, the first milk brand of its kind out of Chhattisgarh. This factory will also provide employment to 10-15 people from the local communities.

“The milk farmers had to sell one litre of milk for around 25 rupees after travelling for 20-30 kilometres and this would make the entire process very unprofitable. So to enable their marketing skills and provide them some good price, we started a co-operative society to run a milk processing plant which will be processing 10,000 litres of milk per day. We are giving 31 rupees per litre to these milk farmers which is the highest in the country.” Says K C Devasenapathi, Collector, Surajpur.

“The principle focus of the district administration of Surajpur as clearly outlined by the collector Sri K.C Devasenapati is we must always try to improve the livelihood of the local communities by giving impetus to their primary occupation. So in the case of Silphili it is milk farming.” Says Adeeb Wahab, Chief Minister’s Good Governance Fellow, Surajpur. Adeeb is in charge of the facility and he is confident that it will bring in a new era of prosperity to the milk farmers of the region.

Promoted as ‘Chhattisgarh’s own brand’, Pilkha Ksheer is all set to hit the market very soon. The administration is confident that it will be popular within a short period of time. The processing facility is also being designed as a family hangout place with a milk parlour and a few shades. This facility is on the busy road connecting Ambikapur to Surajpur and is a very busy road. This is an ideal place for such a hangout place, the first of its kind in entire Chhattisgarh. “Apart from being a regular hangout place this will be an ideal eatery for the office goers and students. They can take their breakfast here on the way to work or educational institutions and similarly, can have their evening snacks on the way back.” Says Adeeb. The parlour will be managed by a Women’s Self Help Group.

The brand is going to be promoted in a way so that it can compete with corporate brands. While the brand will be introduced with packaged milk at the first phase, it will also include other milk products later. The milk farmers of the region are also very enthusiastic about the brand and they feel it is going to change their lives.