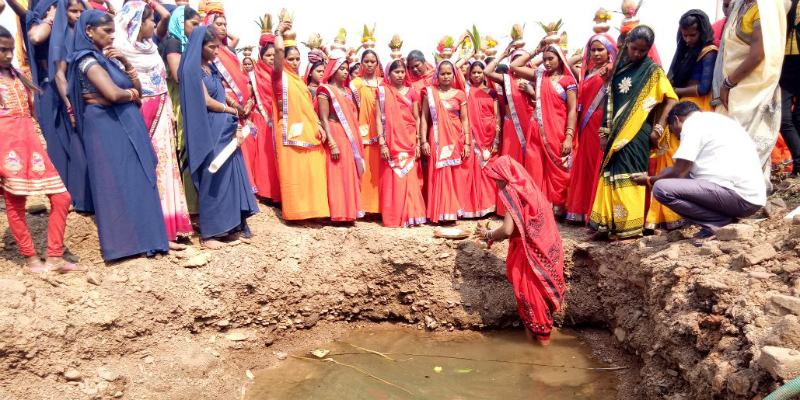 The Sakri River is a tributary of the Mahanadi with its highest elevation at 2840 feet (ridge area) and lowest at 1000 feet (low lying area). With a watershed area from Choura to Pipariya villages being 410 km square, its total length in District Kabirdham in Chattisgarh is approximately 90 km. There are 18 Gram Panchayats (GPs), with 28 villages that fall within this watershed area.

The lifeline of around 50 villages in District Kabirdham, over the years, the Sakri River has suffered from massive soil erosion in the forest area, extensive siltation along its banks, longitudinal disconnect due to poorly designed structures like anicuts and check dams that has resulted in ground and surface water crises. This has adversely affected the surrounding villages which are largely sustained by an agricultural livelihood. Of the 90 km, the river path in the watershed area that needs to be treated is an estimated 38 km long. This need assessment led to the formulation of the Sakri River Rejuvenation Project.

Supported by the Mahatma Gandhi National Rural Employment Guarantee Act (MGNREGA) scheme and the Infrastructure for Climate Resilient Growth (ICRG), several strategies were applied, as part of this project, to arrive at viable solutions. At the first level, Units for Program Management (PMU), IEC & Documentation, Capacity Building & Mobilization and Technical work were assembled followed by orientation of district authorities, officials of Panchayati Raj Institutions (PRIs), Self-Help Groups (SHGs) and local villagers. At the second level, community mobilization was carried out through Information Education & Communication (IEC) activities where women’s groups formed under the aegis of the National and Chattisgarh State Rural Livelihood Missions (known popularly as ‘NRLM’ and ‘Bihan’ respectively) campaigned for the project by undertaking a ‘Kalash Yatra’ and painting motivational slogans on walls to increase awareness. At the third level, ground-based technical research teams were formed with performance engineers and other technicians from the Government Departments of Rural Engineering and Water Resources and Forest Department officials.

These teams collaborated with the Earth Science Department of the Indian Institute of Technology (IIT), Kanpur to study the river flow and forest area to understand the river bed profile (using drone technology) in order to prepare estimates and formulate solutions that could be implemented. The drone survey was inaugurated by the Hon’ble Chief Minister of Chattisgarh – Dr. Raman Singh, on 18th February, 2018 on the Sakri river bank at Samnapur. The preliminary findings yielded recommendations such as renovation and desiltation of the river banks with proper maintenance plans, removal of structures present across the river channel that severely obstructed the river’s flow and caused siltation on the river’s banks, channelization of the river bed, plantation of trees in the floodplain areas etc. A significant number of these implementation activities entrusted to the MGNREGA and the Forest Department have been completed and the rest are in progress. An amount of Rs. 213.63 lakh has been spent thus far, with regard to the same.