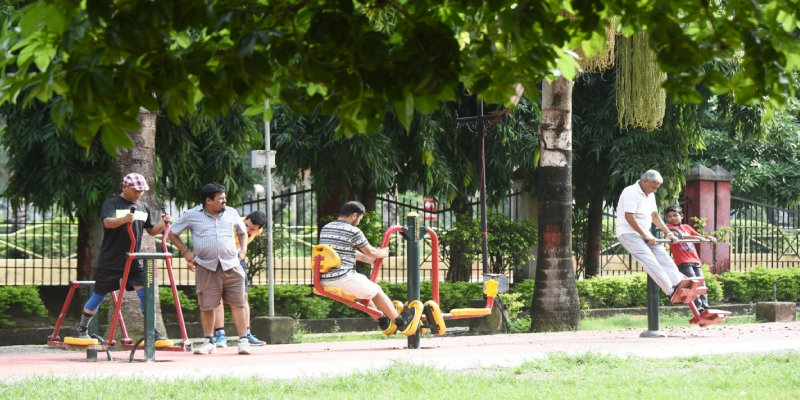 Raipur gets 100 new open-air gyms, and they’re open to everyone

For the residents of Raipur, the capital of Chhattisgarh, an outdoor morning fitness routine is fast becoming the new normal.

As the city begins to stir awake and the usual morning cacophony starts to increase with the intensity of the morning sun, you see the recreational spaces and parks coming alive. People across age groups walk, jog or actively exercise on air walkers, sit-up benches, air swings, twisters, gliders, and other such all-weather exercise equipment. People queuing up for their turn to exercise are now a daily affair. The scenes are similar in the evenings as well. All thanks to the 100 open air gyms that have been installed at a number of public spaces in the city.

Today, these open-air gyms tell a story of positive transformation.  They have become a regular destination for several citizens who enjoy working out under the sky and enjoy their daily dose of fresh air. The footfall in public parks and recreational spaces has increased manifold.

Why an open-air gym?

A report on Raipur’s demographics revealed that about 60.6 percent of the city’s population fell in the working age group. This number is likely to increase to 64 percent by the end of 2022. However, the reality of modern urban life is that working professionals often lead a sedentary lifestyle, leading to higher incidence of chronic diseases such as diabetes and heart ailments. This not only impacts the quality of life but also negatively impacts their ability to contribute to the socio-economic growth of the state.

Research also shows that communities with the highest levels of reported exercise are also among those with the highest levels of overall wellbeing. Exercise is a powerful tool in the quest to help transform the persistent health challenges that accompany urban lifestyles. Surveys also highlight that the more time children and the elderly spend outdoors, the more they tend to exercise. But outdoor spaces in cities struggle to compete with today’s enticing indoor environments. In order to draw people, outdoor spaces must become as appealing as homes and malls – better still if they have exercise options incorporated into these outdoor environments, and even better if they are free, inclusive and accessible to all.

The on-ground reality, coupled with widely accepted research findings, made the government believe that it was vital to design and implement a welfare initiative that promotes a healthy lifestyle. Their belief was bolstered by research which showed that moderate-intensity exercise undertaken at leisure contributes positively to good health.

Armed with these learnings, the district administration of Raipur installed 100 open-air gyms at public spaces across the city – from public parks to recreational areas as well as public spaces such as educational institutions, hostels for tribal students, and even in slums.

The success of the programme has prompted the district administration to further expand the programme and set up another 100 open air gyms in Raipur’s periphery, thereby promoting inclusive development.

When the intention and effort is earnest, the impact will be too

The concept of open air-gyms isn’t new or novel. In fact, globally, the concept of open-air gyms is popular, especially in countries such as China, Singapore and Sweden. In recent years, India too got its share of such facilities, though mostly limited to the metros or Tier 1 city. However, Raipur is one non-metro city that has bucked this trend.

An interesting point to note is that the Raipur district administration completed this project using idle funds from the Zilla Nirashrit Nidhi.

The setting up of open-air gym may not have grabbed headlines or made it to many mainstream media channels, but its success lies in the impact it has created.

While it’s easy to label the initiative as a small welfare programme, when compared with larger and more impactful initiatives that address pressing challenges such as access to medical facilities, roads, or education, it’s also important to ask: how many cities or metros in India can boast of such a comprehensive spread of open-air gyms?

The thriving open-air gyms in the capital of Chhattisgarh are a definite indication that a welfare scheme, however small, will benefit its citizens if it gives them what they need and is planned and implemented smartly. In setting up these open-air gyms, the Raipur administration is setting goals for the rest of the country to follow.

The city administration of Raipur has built over 100 open-air gyms to encourage its citizens to stay healthy.  While

Raipur – a city that exercises together

Often, when citizens ask for welfare initiatives, local governments cite the non-availability of funds. However, this was not the case with the While the initiative may not have grabbed headlines or made it to many mainstream media channels, its impact cannot be negated.