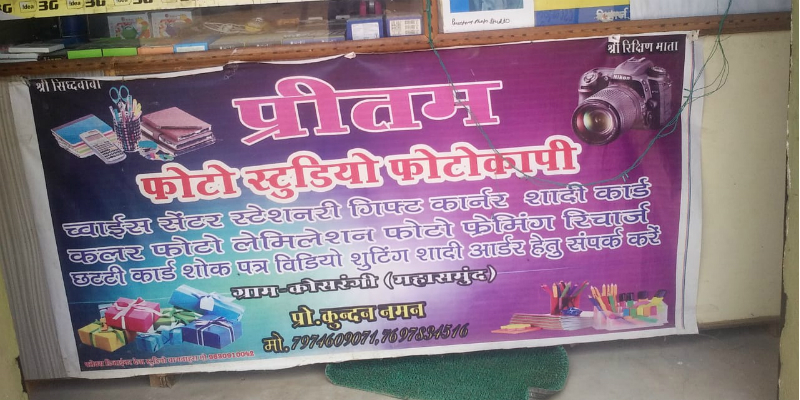 Through this, persons with disabilities are not only strengthened in terms of their day-to-day finances, but leeway is made in improving their social lives by empowering them to become more and more economically independent.The Corporation provides loans for this, at low interest rates through a new scheme. The scheme is implemented through the Social Welfare Department, which receives applications for the same, scrutinizes it and then approves the loans for eligible candidates. Mr. Pritam Sahu, a person with disability from a village called Kosrangi, in the Mahasamund development block, is one such beneficiary who has used the scheme’s benefits to become self-employed.

Pritam states that the financial situation of his household had been poor for quite some time. Even after completing his graduation, Industrial Training Institute (ITI) and Diploma in Education (D.Ed) studies, he was always worried about improving his family’s financial status, being its oldest member. When he first came to know about the loan disbursement scheme of the Chhattisgarh Disabled Finance & Development Corporation, without missing a beat, he immediately headed to the Social Welfare Department in the district headquarters and enquired about the same. He applied to receive benefits of the scheme, after the Department officials explained to him in detail regarding what the scheme entailed for persons with disability and their economic life.

His application was scrutinized by the Department officials and when finally accepted, he received an amount of Rs. 2,70,000 as a loan in April, 2018. Using this loan amount, Pritam opened a shop where he sold stationery, ran a photo studio and a mobile phone repairing station. Through the running of his shop, he now earns anywhere between Rs. 8000 to Rs. 12,000 per month. Using his regular income, he now pays back a loan installment of Rs. 5800 every month, diligently. His younger brother supports him fully in running the shop front. Pritam highlights how several such schemes to advance social welfare initiatives have been brought in through governance, emphasizing the importance of the same for empowering persons with disabilities.

He whole-heartedly encourages others like himself to take advantage of what these Government schemes have to offer and to improve their lives, the way he did. Through his remarkable resilience and dedication to working hard to establish his shop after receiving the loan, he has overcome his disability, becoming economically independent while supporting his entire family, just like any of his able-bodied counterparts.