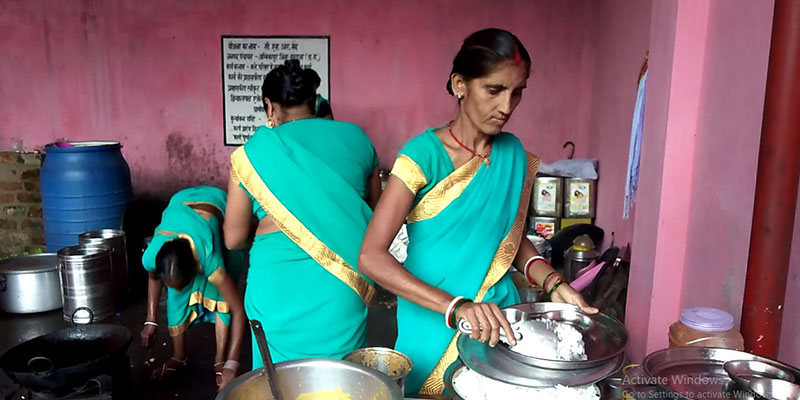 Once shy of entering restaurants, these women now run a popular canteen in Sarguja district of Chhattisgarh

There was a time when Sadhana Kashyap would avoid entering restaurants. She would not even venture out of her house if possible. The shy housewife just wanted to stay at home doing household chores without being bothered about the outside world. Today she, along with nine other women, runs a very busy and popular canteen at the Collectorate at Ambikapur in Surguja District of Chhattisgarh.

Four years ago Sadhana and her group members were motivated by the then Collector to get associated with the Bihan scheme under National Urban Livelihood Mission. The Bihan scheme encourages women to take up training in various trades of their choice and run their own enterprises. Sadhana and her group were given the opportunity to run a canteen by the Collector. They formed Somu Swayam Sahayta Samuh, a Self Help Group and started running the canteen. The other women are also from similar backgrounds.

“It was very difficult at first. We were not very experienced and we were all very shy too. But we realised that what we do every day at home can now bring us some money if we do it outside so we started it. My husband also encouraged me. When ‘Collector madam’ left, some people said we will not survive without her support. But we feel proud that we managed to run the canteen successfully and survived.” Sadhana says with a smile. The smile is not that of a shy woman low on confidence anymore. Her smile reflects a high level of confidence and self-satisfaction.

“We are making profit and we want to continue this. When we started this I would come to work in an auto rickshaw. Now I have my own bike.” Says Sadhana. Every woman in the group makes at least 5000 rupees every month. Two of the women have constructed houses with the earnings from the canteen. There was a time when no one would lend money to these women. But now they are known by their financial capability. “Now they know that we are capable. They know that lending money to us is safe and we can pay back. When we need 10,000 or 20,000 on emergency basis we can manage it on our own without any help from others. So we have a good reputation”. She says. Sadhana’s biggest dream is to ensure good education for her children. “I want to support their education. I want them to get as much education as they want so they do not have to feel, later in life, that their parents did not fulfil their dreams of higher education.”