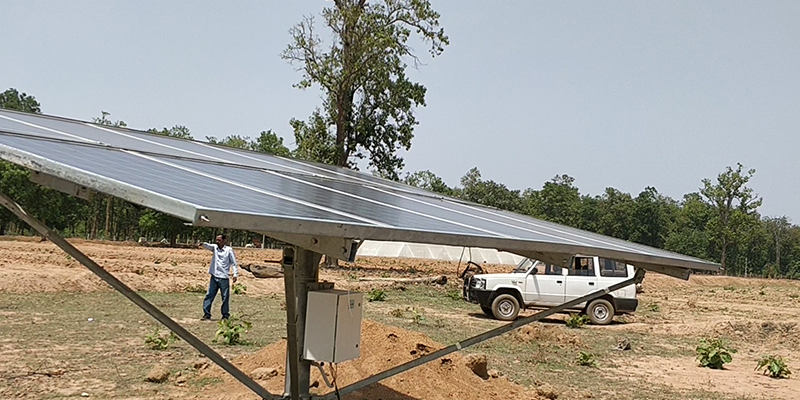 Once dependent on rain, a Chhattisgarh village sows the seeds for sustained livelihood all year round with community farming and alternate irrigation

Once you enter Chaargaav, a village in Chhattisgarh’s Bastar District, you will marvel the rows of tiled brick houses. The uniformity lends the village a kind of artistic charm.  The one thing that’s sure to catch your eye when you first visit the village is the dried wood systematically placed to form a fence. The green periphery of shrubs, grassland, trees, and cowsheds add to an idyllic rural charm.

This is in stark contrast to the scenario a few months earlier. Like many other villages in the district, Chaargaav was dependent on agriculture of 148 acres of land which was solely rain-fed. This meant that the harsh summers and poor monsoons made farming and related activities unimaginably difficult. The cycle of floods and droughts added to the woes of the residents.

At present, 44 farming families in the village own the 148 acres, which is land given to them under the Forests Rights Act of 2006. But because the farmers relied on the rains, more often than not it remained barren sans vegetation. The problem would be compounded by abysmally low yields – mostly because the farmers owned small pieces of land and followed primitive methods of farming. This meant that they also resorted to unsustainable practices of collection and the sale of forest produce to supplement their meagre agricultural income.

Determined to make a difference, the district administration took a proactive approach to bring about the much-needed change. They did this by bringing together relevant social welfare schemes like the Mahatma Gandhi National Rural Employment Guarantee Act (NREGA) and local government departments such as Agriculture, Horticulture, Fisheries and the Forest Department. The key objective of the campaign titled Hamara Jungle Hamara Jeevika  was to enable the 44 farmers who owned the 148 acres to optimise the land usage and thus provide sustainable livelihood opportunities.

A key focus of the initiative is to enable the farmers of Chaargaav to practise agriculture all through the year.  As a first step, the farmers were educated on the benefits of community farming so as to get their buy-in. Next, the administration began working to remedy the water scarcity. By digging borewells in the farms and connecting them to solar water pumps, they made it possible for seamless irrigation to become a reality in the village. Ground water was replenished by digging recharge wells in the larger farms.  The Fisheries department was roped in to help the farmers earn income from the recharge wells by training them in pisciculture. The farmers were also given training on rearing goats to further supplement their income. Expenditure for goats and construction of animal sheds was funded under the NREGA.

Pawan Kumar Singh, APO, NREGA, says, “We began the initiative in March 2018. The initial weeks were spent trying to demystify what community farming was all about and why it is an important tool for sustainable development of Chaargaav. Once people bought into the idea, the next few weeks were spent on optimising the different welfare campaigns and initiating on-ground activities like installing solar pumps, getting the farmers trained in commercial fish farming, etc.”

He adds, “In addition, we have tried to provide employment opportunities specifically to the women as well. For instance, the wooded fence that you see in the village has been created by the women of the several self-help groups in the village. One SHG has also been given the responsibility of maintaining the warehouse, so that the agricultural produce is well taken of before it hits the market.”

In three months, between March and May 2018, the Hamara Jungle, Hamara Jeevika campaign has been able to leverage funds to the tune of Rs 3 crore from already existing public welfare schemes. While the land has been levelled, tilled and seeds of food grains and pulses sown, Moringa trees have also been planted at the periphery of the land. Pawan Kumar says, “Today, the demand for Moringa is huge. Hence we decided to plant these trees and further enhance their livelihood opportunities.”

The project co-ordinators and the villagers meet at least once every fortnight to discuss the progress and address the challenges.

Today, a few villagers from Chaargaav have gathered under a canopy of trees to meet representatives from the district administration and get their inputs on how to practise agriculture all around the year.

Farmer Ram Kumar says, “Earlier we would be idling for months together and praying that the rain gods will be kind the next year. But that’s all going to be a thing of the past. We are now being equipped with the infrastructure and information that will help us be productive through the year, irrespective of the seasonal fluctuations.”