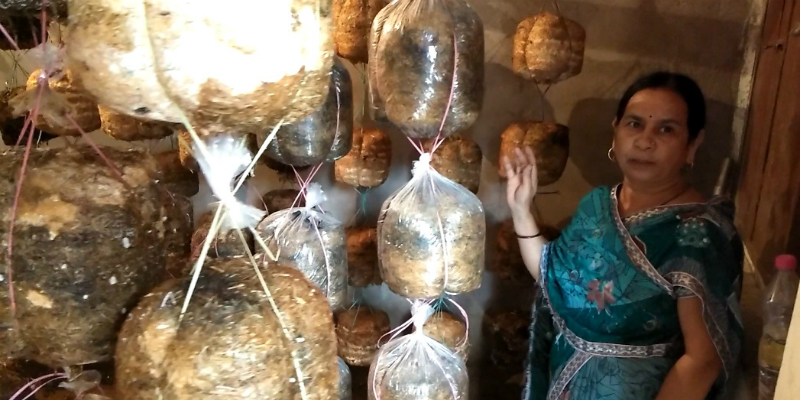 Mushroom Cultivation has changed the life of Sumati Mishra of Surguja

Sumati Mishra of Nawapara in Surguja district of Chhattisgarh lost her husband long ago. The challenge before her was to run her family and to raise her children. She has two daughters and one son. To manage her family she started working hard. For ten years she span yarns but it did not give her significant profit. Sometimes she would not get any profit and therefore it made her nervous about her future. “I used to work for the whole day but it was not very profitable.

Then I started making Papads but it did not give me much profit either. At that time someone told me about mushroom cultivation and that there is the scope of training in mushroom cultivation in Ambikapur itself. SO I went straight to the Horticulture department and met Dr. Prashant Sharma of the Biotech lab. It was the turning point for me.” She says.

The administration has also set up mushroom production units and procurement centers. The farmers can sell their produce in these procurement centres for a good price. A processing unit has also been set up at the biotech lab and various mushroom related products are being processed there. All these steps are taken to encourage and support mushroom farmers. The administration is also planning to associate mushrooms with the mid-day meal scheme in the schools.

With so much emphasis on mushroom cultivation, Sumati did not have to worry about selling her produce. All her mushrooms were bought from her home itself. “I started to earn good amount of money and I expanded my activities. Initially I did mushroom cultivation at one place and then I started doing it in another place too. I am getting a good amount of money and I am able to support my family without any headache.” She says.

“Mushroom cultivation has been the lifeline of my family. I am planning to expand it further. My younger daughter helps me with my work and she is very excited about the prospects of mushroom cultivation.” She says.

Sumati is grateful to Dr. Prashant Sharma of the biotech lab and the district administration in general for the support she has got. “Without their support it would have never been possible for me” She says.