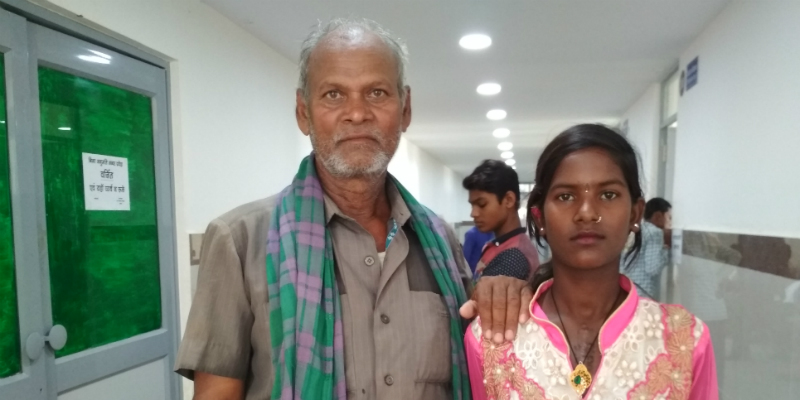 Ranu is in the eighth grade and is a resident of Tanduari village of Kawardha district. Her parents have eight children. Ranu has six sisters and one brother. Her parents are farmers. Therefore, their income is not enough to fulfill the needs of family. Ranu's parents also work as daily labourers. They are an extremely poor family.

When Ranu was studying in class 5, some government doctors came to her school to examine the health of the children in their school. All children went through thorough examination. Ranu was also examined. During the health checkup, it was found that Ranu’s heartbeat is not normal. With unusual heartbeat, doctors realised that Ranu had a heart disease.

After this, without losing any time, the doctors did the '2D Echo Test' of Ranu's heart. It was clear from this test that Ranu had a disease called 'Tetralogy of Fallot'. This disease is inborn and the risk of dying increases if not treated.

Treatment was absolutely necessary, since Ranu's life was in danger. Doctors told that Ranu has to undergo a bypass surgery to get rid of this complex heart condition. As soon as Ranu’s family heard the word surgery, they got extremely worried. Her family knew that there would be a lot of expenditure involved in the surgery. And, they also knew that even after selling their entire property, they would not be able to mobilise the required amount of surgery.

Meanwhile, officials of the government hospital told Ranu’s parents that in order to treat poor children in Chhattisgarh, Mukhyamantri Bal Hriday Suraksha Yojana has been started. Under this scheme, the state government provides free treatment to the poor and needy children to get rid of heart diseases. The officers completed all the paperwork for Ranu’s case and arranged for her bypass surgery. In September 2015, Ranu’s bypass surgery was done at the Apollo Hospital in Bilaspur. Surgery was successful and Ranu got rid of the complex heart disease.

Ranu is now healthy and happy too. Her grandfather Banshi Ratre said, "If the government had not got my granddaughter’s surgery done, I don’t even want to imagine what would have happened. May the doctors be blessed, who discovered Ranu’s rare heart disease and then treated her as well."

The health check was done under the 'Chirayu Yojana' of the Chhattisgarh Government. Under the 'Chirayu Yojna', health check-ups of children are conducted across the state and as per the requirement, free and proper medical care is provided by the government to the poor and needy children. Ranu’s bypass surgery was done under Chhattisgarh's Mukhyamantri Bal Hriday Suraksha Yojana. Under Mukhyamantri Bal Hriday Suraksha Yojana, financial assistance is given by the state government for the treatment of seven different types of heart related diseases to the children of poor families. In cases of heart-related diseases mainly help is given up to 1.30 lakh rupees for general surgeries, while 1.5 lakh rupees is given for complex surgeries. 1.80 lakh rupees is given in the condition of valve replacement. The expenditure of Ranu’s bypass surgery came around 2 lakhs rupees.