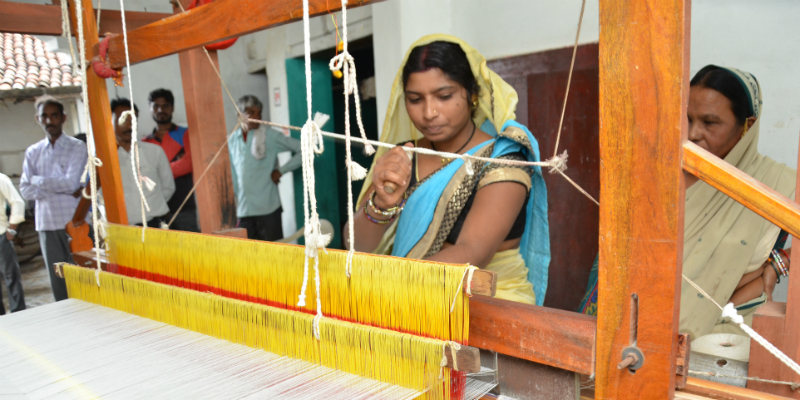 Savitri Bai Devangan, 55, lives in Sukuladaihan village of Rajnandgaon district with his son, daughter-in-law and two granddaughters. There was a time when their life was miserable. Weaving was their family tradition and Savitri used to weave clothes on handlooms. But after the arrival of the power loom in the market, and after the boom of readymade garments hit the trends, the demand for clothes woven on handloom died significantly.

Gradually, the income of traditional weavers started to decrease. For this reason, many weavers stopped working on handlooms and started taking up different jobs at different places. Some weavers started working as daily wage earners in the fields, some of them turned to the cities and started taking up whatever work that came to them. Savitri Bai's family also, gradually, got away from the handloom. She started working as a laborer to raise his son's family. On a lucky day, when they would get work, they’d have money, but on jobless days, neither would they have income nor food to eat. Their days were filled with great troubles.

They started seeing better days when the Weavers Co-Operative Society became active in the village. The committee was established with the help of the Chhattisgarh government, especially the Rajnandgaon District Administration. They started providing the weavers with the yarn. Not only this, it was also assured that the government will buy all the clothes woven by the members of the co-operative. After this, Savitri Bai’s family restarted their work on the handloom in their house. Her daughter-in-law now makes garments on handloom. They work on the handloom for at least 8-9 hours every day. Due to this her family is able is earn around 9 to 12 thousand rupees per month.

Savitri Bai is not alone, there are many women like her who have returned back to handloom and are weaving a new wave of happiness. Because of the government's efforts many traditional weavers have returned to their old business and are very happy. In order to achieve the goal of ‘har haath ke kaam', the government has decided to expand the handloom industry greatly. Government of Chhattisgarh has given instructions to the departmental officers to prepare 19,500 pieces of cloth every month from weaver’s cooperatives under the Shaskiya Vastra Pradaye Yojna. The important thing is that in Chhattisgarh, about 70,000 weavers are engaged in direct and indirect employment on 16,667 loops. In the year 2016-17, weavers were distributed a remuneration of about 50 crores rupees.

As far as women weavers are concerned, about 6000 women of 660 women self-help groups are getting employment in the state by stitching uniforms of school children. It is worth noting that similar-looking cloth is prepared by the weavers' cooperative committees of the state. These clothes are being supplied uniformly by the women's self-help groups in rural areas and in educational department. This scheme is generating additional employment. For the financial year 2017-18, a demand order of 45,79,000 uniform sets worth 91.88 lakh rupees was received from the Department of Education. So far 17,64,000 thousand uniform sets have been supplied.