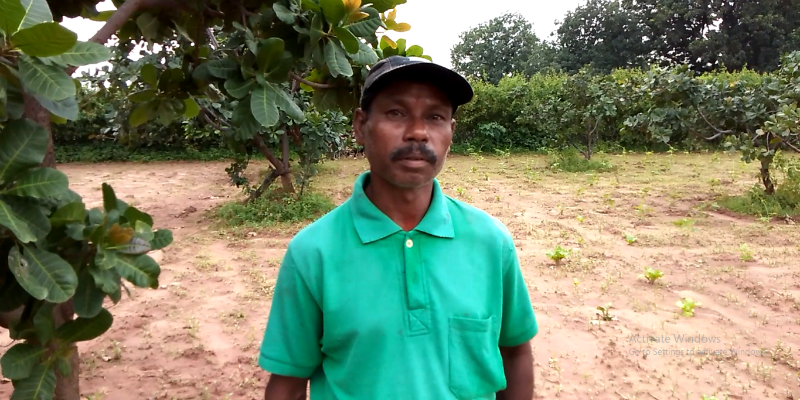 Manbodh Bisra has secured his future with cashew farming

Manbodh Bisra of Duldula in Jashpur district of Chhattisgarh had been fighting with poverty for a long time. He had a plot of land but it was barren. Looking after the five member family was a tough job for him. But he got an opportunity to change his life and it came in the form of cashew nut farming.

Manbodh was told by government officials to take up cashew farming. They also told him that it would take some time to give results but it would be very profitable. He decided to try it but some people warned him that it was just a conspiracy by the government and corporates to garb his land. He, however, did not listen to those people and went ahead with cashew farming. Five years later, his plants started to yield cashew. Initially the kernel was being sold for 40-50 rupees per kilo. Manbodh and other farmers were selling it to the brokers. However, with the district administration’s initiative he became a member of Farmers Producers Organisation which made it possible for the farmers like him to eliminate the middlemen and sell their produce at a much higher rate.

Manbodh today sells the kernels at the cashew processing unit set up at Duldula by the district administration. “It has helped us a lot. We are making a lot of profit because there is no middleman now. There were people who would try to scare us that cashew farming would ultimately lead to our lands being grabbed by corporate houses with the help of the government. They said they would secretly install some devices at various places in our land and finally we would lose the right to our land. I did not pay attention to such stupid talk and today when they see me making money they repent. They regret not taking up cashew back then. On the other hand, I have been able to support my family much better with cashew farming. I have been able to marry off my daughter and support the education of my other children very well. Without cashew farming it would have never been possible for me to spent do much money on my daughter’s wedding or for the education of my other children.” Says Manbodh.

Jashpur administration’s vision to multiply the income of the farmers has been a success story that is testified by farmers like Manbodh. Today, Manbodh is an example for other farmers. They have been encouraged by his story. “Several new farmers are showing interest in taking up cashew plantation and I encourage them. It has worked for me and many others and many others already and it can work for many more farmers.” He says.

The Jashpur district administration is trying to promote a new brand named Jashpur Cashew. The cashew nuts processed and packaged at the processing unit is being sold at various outlets and is gradually gaining popularity. The administration plans to market it nationally and establish it as a leading cashew brand.