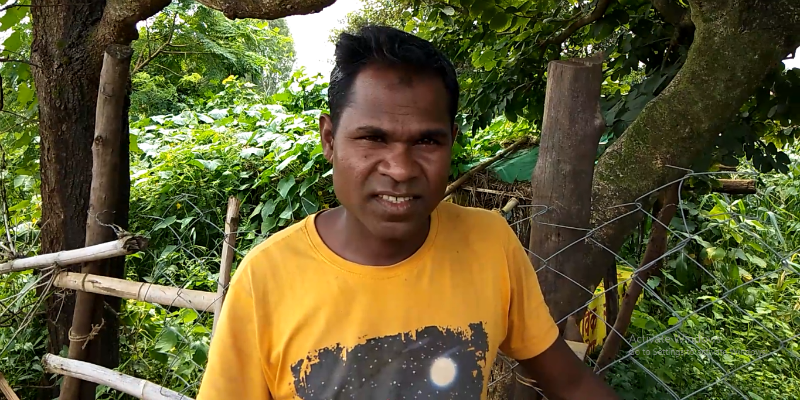 Kuldip Tirkey of Akrikona Village in Jashpur district of Chhattisgarh rears goats. It is his main source of income for him and he supports himself and his family with the income from this. Kuldip’s family consists of him, his wife, two children and his parents. Supporting the six member family was difficult a year ago. He could only rear one or two goats at that time. “I could not make much money with one or two goats. It was not enough to support my family.” He recalls those days.

But the days of hardship are over for Kuldip. He has around 20 goats now and his profit is 30-35 thousand rupees. This change in his life has been made possible by an initiative called Sampann 40. It is an initiative by the district administration to help the farmers multiply their profits through convergence of various schemes from different departments. Departments like agriculture, fisheries, horticulture etc. have collaborated together to achieve common goals under Sampann 40. The farmers have been getting training in modern methods as well as technical and infrastructural support. They also get marketing support. When Kuldip was introduced to Sampann 40, he decided to get involved in it. A goat shed was constructed where he is rearing around 20 goats now. “Earlier, I could hardly rear one or two goats because I had no shed. Now I am rearing 20 goats and am making enough money to support my family.” He says.

Kuldip is not under financial constraint anymore. He is able to support his family and is also hopeful that life would be more prosperous in the coming days. He wants to ensure that his children gets very good education and can secure a better future for them. “I want to make sure that my children gets very good education. I want them to become successful and have a great future.” He says.

Many farmers in the village Akrikona have been benefitted from Sampann 40. Kuldip thinks that the support from the district administration is a boon for the farmers and he encourages others to get involved with the initiative too. He feels that Sampann 40 can lift farmers out of poverty and ensure financial security for them.

The Sampann 40 is a perfect example of how synchronisation between various government departments and agencies can be beneficial in achieving common goals. This initiative by the Jashpur district administration can be a model for other parts of the country too. Agriculture has played a very significant role in Indian economy and society and the farmers consist a very significant segment of the Indian population. However, these farmers have been facing a lot of challenges in recent time. Chhattisgarh being one of the states where agriculture is a major source of livelihood of people has taken various steps to improve the conditions of the farmers. The Jashpur district administration’s initiative is a very significant step in this direction and it is indeed a ray of hope for the farmers in the district.