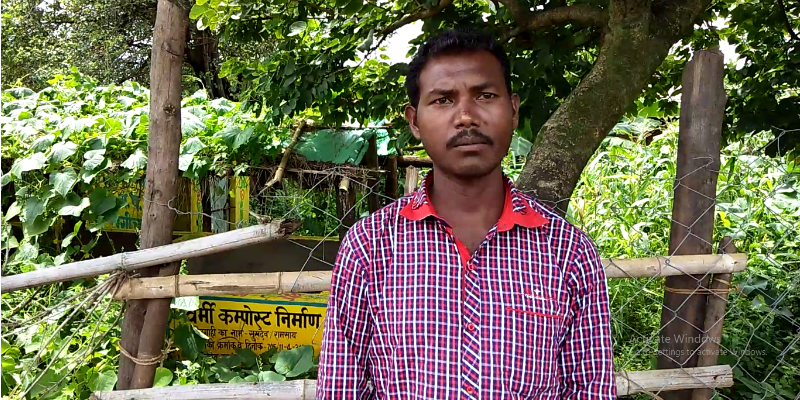 Jayendra Bhagat is not facing losses in agriculture anymore

Jayendra Bhagat of Akrikona village in Jashpur district of Chhattisgarh had faced a lot of problem irrigating his fields. Despite being situated on the bank of river Ib, there was no irrigation facility for the farmers.

Water is the lifeline for farmers. Without water, the crops cannot sustain. Dearth of water or irrigation facilities can be the worst nightmare for farmers as it can destroy their crops. In many parts of the country, many farmers give up farming because of this reason. Jayendra was also facing at a bleak future because of this. He had a diesel-run water pump for irrigating his fields. He could irrigate his fields with this pump but it was too expensive to operate because of the diesel. “We had no profit. The diesel costs were too much compared to the earning from the fields.” Says Jayendra.

However, Jayendra’s fate changed with the Sampann 40 initiative by the district administration. Through Sampann 40 the farmers get benefit of various schemes of different departments. The unique convergence of these schemes under the Sampann 40 has resulted in a massive change in the lives of these villagers. Jayendra has also benefited from the initiative. The resource persons from various departments have given him tips and taught him some advanced methods of agriculture. Earlier the farmers in the village were using traditional methods only. Today, they use advanced methods and are reaping the benefits.

Jayendra now grows chilies on 1.5 acres of land. The diesel pump has been replaced by a solar pump with the help of CREDA and he is now irrigating his fields without having to spend a lot of money on diesel. Jayendra is now able to support his family with his income from agricultural itself. He does not have to think about other means of earning like before.

Chhattisgarh government has been supporting the farmers through various schemes. Uplifting the farmers from poverty is an objective that the state government has been working on. At the Jashpur district, the administration has been successful in achieving this objective through Sampann 40. Conceptualized by Priyanka Shukla, the Collector of the district, the initiative has been very popular among the farmers. The farmers here are now getting a new lease of life with the help of these schemes. Farmers like Jayendra are no longer helpless and poor. They are in a position to fulfill their dreams and aspirations now. “We are benefited from Sampann 40. It has helped us lift ourselves from a position of poverty and helplessness. The officials from various departments have helped us a lot and without their support we would not have been able to do it.” Says Jayendra.

Today Jayendra is planning to further increase his profit and he is confident that agriculture itself will ensure a better future for his children. “With Sampann 40 I see hope for future. I am planning to increase profit with the help from the administration. They are providing us better seeds, better facilities and teaching us better methods.” He says.