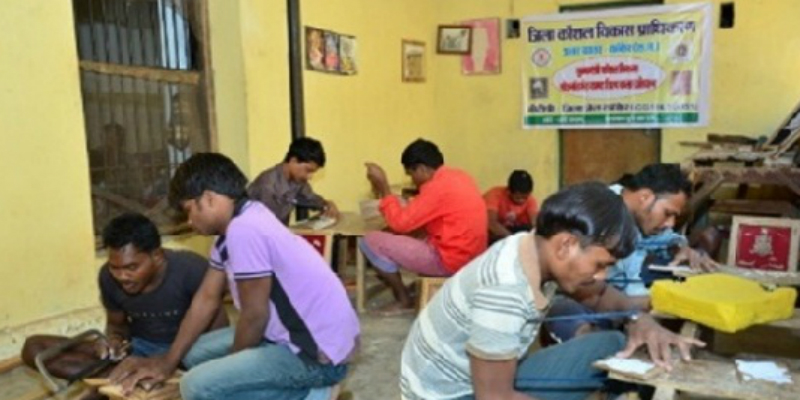 Inmates of Kanker have won hearts with their art

Prisoners in Kanker distrct jail are being trained in different trades under skill development programme. It has been helping the prisoners develop their skills. After their release from jail, these prisoners will not have to wander for the running their families. Using their skills, they will be able to enhance their economic growth.

It is a matter of great importance that Kanker district administration is extending the benefit of the Mukhyamantri Kushal Vikas Yojana to the prisoners and is giving them the opportunity to develop business skills in accordance with their nature and talent. This initiative empowers the detainees in the jail where they are engaged in skill training. After their release from jail, they can support their families.

What is also significant is that the national song Vande Mataram has been written on 36 feet long and 22 feet wide wood through woodwork by the prisoners in Kanker district jail. This work prepared by the prisoners of Kanker prison has been mentioned in the Golden Book of World Records published from the US. The prisoners took 15 days to complete this work. Woodwork made in Kanker Jail has already been in demand. The wooden artifacts made here are also found in the Rashtrapati Bhavan. Naval Kishore Rathi, director of the Ideal Chhattisgarh Global Editing Foundation, who got the inmates’ woodwork mentioned in the world record, has also been honoured.

It is worth noting that nearly 400 prisoners are lodged in district Jail Kanker, which is on the National Highway 30, Kanker city. The jail authorities are considering how to improve the lives of the inmates. Initiating the corrective efforts by the district administration towards zeroing the crime, District Jail Kanker under the District Skill Development Authority, VTP has laid the foundation stone of skill development. The prisoners were trained in the art of craft art and they were able to transform their criminal thinking into that of an artist.

The new section of the District Jail was inaugurated on October 18, 2015. As per the directions of Chief Minister Raman Singh, 30 prisoners were attached to masonry and 30 other prisoners to the gardening. The trainees of the masonry programme are being engaged in the construction of mushroom Room. In Order to be able to continuously conduct the skill development training in jail, a 450 square meters training workshop center is being constructed by these trainees themselves. In the initial rounds, during counseling, the candidates were not inclined or interested in being trained, but after right guidance and tactful explanation procedures, the authorities succeeded in beginning the training process. During the training, the prisoners could feel that positive changes were beginning to take place in their thinking. After completing the jail term, they can see new ways of self-employment. They believed that the certificates received from the training would enable them to easily get their loan passed through the bank, and they would be able to self-employ themselves and will finally be able to take care of their family’s needs.