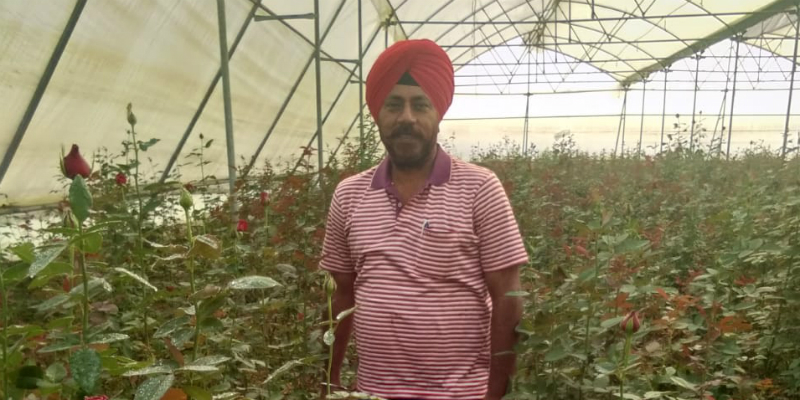 Mainpat in Surguja district of Chhattisgarh is a hilly region with a pleasant climate. When Narendra Singh, a resident of the area saw some people growing roses in polyhouses in Raipur, he thought it might be more suitable for Mainpat. He was curious about the possibilities of growing roses there. Two years ago, when a polyhouse scheme under National Horticultural Mission was introduced by the horticulture department of Surguja, Narendra Singh decided to take up rose farming.

With support from the horticulture department he set up a 2000 square meter polyhouse and started cultivating rose. Earlier attempts of cultivating rose had not been successful at Mainpat. But Narendra Singh was successful in his attempt and he is now planning to cultivate roses in a big way.

Narendra Singh is excited about hissuccess. “Studies have proved that the climate in Mainpat is good for flowers.So I though why not roses? When the polyhouse scheme came up and I was chosenfor the project here, I took up rose cultivation.” He says.

Today his rose cultivation is givinghim good profit. He has several employees in his polyhouse. “If theHorticulture department extends more support, I am planning to cultivate rosesin two acres of land next and my aim is to target the markets in Varanasi andAllahabad as well.”

Narendra Singh feels that rosecultivation can be the next big thing in Mainpat. Thus it can revolutionise theeconomy of this region too. “What I started as an experiment has beensuccessful and now I am confident that if it is done at a larger scale, it canbecome a lucrative source of income. Apart from being a profitable venture, itwill also create employment opportunities for a lot of people.” He says.

Singh takes pride in his roses. But theseroses are not only a matter of pride for him but also for the entire locality.People often come to see his polyhouse where they can see a vast orchard of beautifulroses.

The officials of the horticulturedepartment are enthusiastic about the success of the rose cultivation project.They feel that large scale cultivation of roses and other flowers can becomesuccessful in Mainpat and other regions. A K S Pekra, Deputy Director of theHorticulture Department says, “Cut flowers, especially roses have shown greatresults. Similarly Gladiolas has also shown good results. It can be a verylucrative source of income for farmers. We are providing support to farmers incultivation of cut flower, bulb flower and loose flower in the form of 40percent subsidy under the National Horticulture Mission. We are also providingsupport to them by constructing polyhouses and sheds. The farmers arecultivation flowers of their choice and with this kind of support they are alsogetting good results. We are hopeful that we will see a significant rise inprofit in this sector in the coming days.”

Like Narendra Singh, many farmers arenow taking up cultivation of flowers and many more are about to follow suit.