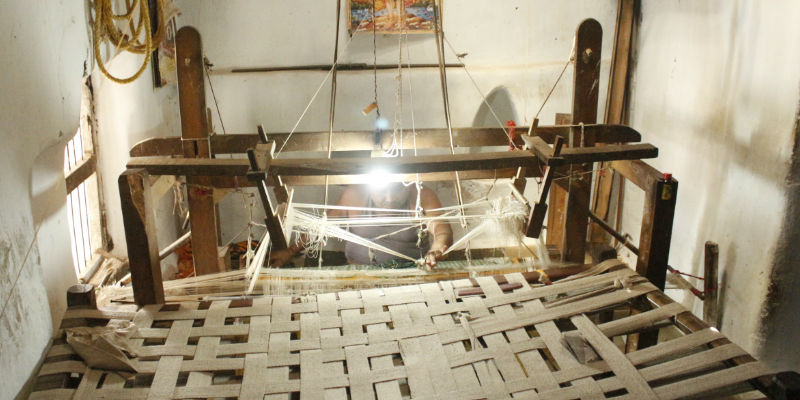 How the weavers of Bhanwarpur are e-crafting a success story

Prateek Kumar Dewangan, a weaver who runs Panchvati Handloom in the hamlet of Bhanwarpur in Mahasamund district in Chhattisgarh, gets a WhatsApp message from a reseller expressing interest in buying some handloom silk sarees posted on the business’s Facebook page.  The two then get on a call to discuss the deal.

This might seem like very a commonplace experience in today’s world where online business deals and transactions are a part and parcel of daily urban life. But for a weaver in a remote town with limited to no exposure on how online selling works, this is an exciting new experience.

But things were very different a couple of years ago.

When the richness failed to outshine

There was a time when mass-produced digitally printed sarees seemed to have taken over the market. Handloom sarees started being considered old-fashioned, the intricacy and detailing in their weave, and the richness of the hand-made fabrics were underappreciated.

With the market for handloom sarees diminishing, weavers were compelled to leave their traditional occupations and some even had to migrate to larger cities in search of jobs.

Handloom is the new swag factor

But there was a handloom renaissance of sorts led by heightened interest in ethical fashion, heritage, and support for handmade crafts. The fashion industry and government initiatives also played a part in the handloom revival.

Today, across the country, weavers are busy once again working on their warp and weft.  From being resigned to musty corners in old cupboards, today handloom sarees are a style statement. Women across age groups flaunt them at any and every given occasion, not just limiting them to traditional occasions – from running marathons in handloom sarees to sporting them for Sunday brunches at bistros and cafes.

Kalamkaris to Kanchivarams, Mangalgiri to Kota, this new-found interest in handloom sarees, comes as a boon for the diminishing tribe of weavers across India.

But, all’s not rosy with this picture. With greater emphasis on digitally-driven marketplaces, the weavers need to understand how these online marketplaces work in order to cater to the rising demand. Otherwise, they are forced to rely on resellers and middlemen, which means a huge of part of their profit dissolves away.

The weavers of Bhanwarpur of Mahasamund district in Chhattisgarh were among those who were finding it challenging to create visibility for themselves and tap the resurgence of interest in handloom sarees.

Dependency a bane for the weavers of Bhanwarpur

Around 200 families in the village who belonged to the weaver community where the craft had been passed down for several generations, were passionate about keeping it alive. But these weavers were dependent on local businessmen and retailers to make the sales.  Prateek says, “These businessmen gave us the threads as well the design and we were paid daily wages, which were meagre, to say the least. While they made profits, we were finding hard to sustain a livelihood.” Prateek explains that if a silk saree was sold for Rs 4,500, the retailers would rake in as much as Rs 2,000 as profit.

But with handloom sarees gaining their rightful place under the sun, hope came in the form of the opening up of online marketplaces.  The weavers understood that if they had direct access to e-commerce marketplaces and learnt more about online selling, they could benefit exponentially.

Stepping up their game

So a group of weavers from Bhanwarpur got together to self-learn the basics of online selling by contacting a few other weavers from the hamlet who were already online.  “We created Facebook pages and WhatsApp groups and began selling online. For the first time, we were driving the business ourselves without dependency on middlemen,” says Prateek. There were inbound requests to participate in local flea and handicraft exhibitions, which took the weavers to Kolkata. “We made Rs 9200 in sales in just two days.  We felt empowered because earlier we would make a fraction of that money in a month.” Enthused by the encouraging response, the weavers wanted to explore opportunities in online marketplaces, but were unsure how to go about this.

That’s when they decided to connect with the Chhattisgarh government’s Rural Urban Mission, a department of the Ministry of Rural Development which facilitated a workshop with eBay. The weavers attended an online session that helped them understand the basics, such how to promote their product online on eBay, and how to showcase their products more effectively

Armed with the new learnings, the weavers got to together to open an account on eBay.

And, the team is now looking at the possibilities of selling on Amazon. “At the moment, we are trying to sort out logistical issues, so that when we do launch on Amazon, the selling becomes easier.”

From native fabrics to native advertising

Prateek says, “Today I get a lot of orders via WhatsApp and Facebook.  Today, handloom sarees from our humble town of Bhanwarpur are being sold all across the state in cities such as Champa, Bilaspur and outside in cities such as Hyderabad.  The price of our handloom sarees range from Rs 1,500 to Rs 35,000 and we have a market for the entire spectrum. As weavers, we will be able to reap the benefit of this demand, only because we get paid directly for our work.”

Prateek says, “Now that we are beginning to leverage the benefits of online selling, we feel we need funding to make our business ventures sustainable. At the moment, we are looking at tapping relevant schemes promoted by MUDRA, National Rural Livelihoods Mission (NRLM), and even those promoted by the Ministry of Women and Child Development. That apart, we also want to expand our product portfolio beyond sarees. They are actively looking to start a men’s garments portfolio. But, for now, our focus will be to make our online business a success story.”