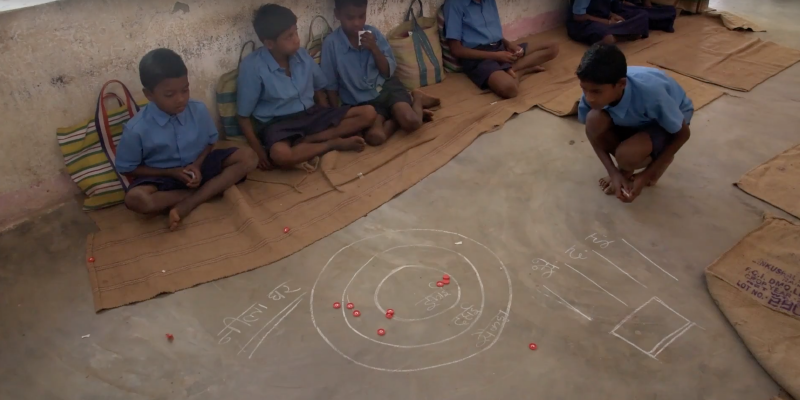 At the Government Primary School in Bastapara Balood, a small village in Chhattisgarh’s Dantewada District, 25 students are moving around in a circle while singing a Hindi rhyme. From afar, it looks like they’re playing a game. While this is true to an extent, what the children are actually doing is learning and understanding Hindi words in a fun and relatable manner.

These 25 are among 38,000+ students from 885 government schools across four blocks of Dantewada district, who are part of the Padhe Dantewada Likhe Dantewada (PDLD) programme – an innovative intervention that aims to improve the students’ mathematical and Hindi comprehension abilities.

In 2016, a baseline survey conducted to assess the basic mathematical abilities and language literacy brought to light some stark truths – only 18 percent of students between Classes 3 and 8 could identify letters in Hindi and read fluently, and only 11 percent of students were able to solve simple mathematical division problems. The National Council for Education Research and Training (NCERT) mandates that Class 3 students should be able to read Hindi fluently and should be able to do simple division. Also, because these students didn’t understand the fundamental concepts, the problem worsened as they moved to higher classes. In fact, this difficulty in comprehension was also found to be the root cause for the low enrollment ratio in Classes 9 to 12.

What made this situation worse was the fact that the district had one of the highest malnutrition rates in the state and was had a high incidence of sickle cell anaemia. Dantewada is an endemic malaria prone zone with an Annual Parasite Index of more than 57 (the normal limit is 4).

So it was imperative to put in a place a system which could help track both, a student’s education and health profile. This wasn’t easy since Dantewada was an under-developed district and had borne the brunt of Naxal violence for several years. It was challenging to implement a periodic evaluation system, as was evident from several failed attempts to do this in the past.  Also, the manual review and monitoring mechanism that was in place was merely ritualistic and wasn’t a fool-proof way to gather accurate data on the students.

The administration realised that a tamper-proof online monitoring mechanism designed to track a child’s academic performance and health indicators could be effective. But 80 percent of the villages in the district did not have internet access or coverage. Also, because the on-ground intervention had to be implemented across the 880+ schools and students’ progress continually tracked, the solution needed a strong network of field task force personnel.

The administration overcame these two key problems ingeniously. Although, a stable internet connectivity would have been ideal, they decided to make do with deploying an Android-based offline reporting system, in the form of the Padhe Dantewada Likhe Dantewada (PDLD) app.  And, instead of hiring additional field personnel, the teachers were motivated to take an additional responsibility of implementing the learning intervention in their respective schools

The district education department got the app designed such that the app works offline and automatically syncs to the online server and uploads data periodically. The app has integrated geo-fencing capabilities to ensure the credible collection of granular data from every school under the programme. The PDLD app is on a multilingual platform with Hindi as the default language to make it easy for the primary stakeholders – over 2,400 government school teachers. It also has a feature which allows one to view the statistics and results in English as well, making it easier for anyone outside the system to keep track of the programme.

To make the results transparent and auditable and make the teachers and the district officials accountable, the results are made public on the www.padhedantewada.com website.

A framework to make implementation – effective, efficient and easy

Effective implementation of an educational intervention involves multiples factors – teacher training, designing the pedagogy, curriculum and regular monitoring and review. And the PDLD initiative focused on all the four key elements.

Special training sessions were organised for teachers to introduce them to the concept of activity-based learning and make them familiar with teaching methods to tackle low learning levels. For effective programme delivery, the learning resources were developed in local dialects such as Gondi and Halbi which could help the students easily understand the content. Block-wise WhatsApp groups were created to engage and exchange Information regarding seminars, meetings and new developments; and even an automated SMS system was introduced for this purpose.

While on paper, the initiative was progressing well, there was the issue of the teachers who came from some of the country’s remotest regions, and were not well-acquainted with technology. So it was only natural that they were apprehensive and hesitant to use the app. However, this initial hiccup was effectively overcome by sensitising them to the initiative's objective – the academic and physical well-being of the students, and also showcasing the user-friendliness of the app and website. The teachers were trained on data collection, maintenance and updates.

The teachers had to dedicate two hours every day for the execution of the programme at the school levels.  Programme-related handouts such as stories and assessment sheets etc. were given to each school, and the teachers were tasked with assessing the learning outcomes of students and facilitating classes. Schools that showed up as low performing were given reinforcements with special training.

To improve the health of the school children, local health workers were roped in to lead and manage health check-up camps. Earlier, the schools did not maintain a health a profile of the students, but today, every school maintains a health profile of the students on the PDLD Android app and the portal. Regular health camps are held to help the schools track the students’ health. In the offing is the convergence of these health camps with related government health programmes. The children with extremely low scores on the health indicators were referred to the district government hospital for necessary intervention. And, for the rest of the children where dietary intervention was enough to tackle malnutrition, additional budget was allocated to the concerned school or hostel..

The programme is jointly owned by the teachers and the district administration officials who, along with the District Collector, conduct review meetings at regular intervals.

Two years into the programme, the impact has been phenomenal, to say the least. Today, Surendra, a student at the Bastapara Balood government primary school, can read Hindi fluently and solve basic mathematical problems with ease. He scored an 'A’ grade in both Hindi and Maths in the mid-line and end-line exams conducted to track the progress of the learning levels of students in the PDLD initiative. A year ago, he had scored a B in Hindi and C in Maths in the baseline exams.  Another student, Chandravati, has improved her score to C and B in Hindi and Maths, respectively, moving from a D and C in these subjects, in the baseline exams. The majority of the 38,000+ government school students have similarly improved under the initiative, as is indicated by the performance data on the PDLD website.

Today, more than 50.6 percent of these students can read Hindi fluently, and the number of those who can solve simple mathematical problems stand at 41.7 percent. This is an encouraging trend, and a significant improvement from the 18 percent who could read Hindi and 11 percent who could perform simple divisions, as revealed in the baseline survey in early 2016. Building a strong foundation at primary and secondary school level has had a positive impact on the pass percentage among class 10 and 12 students too – with the number increasing from 63 percent in 2015-16 to 84 percent in 2016-2017.

The programme has had further indirect yet equally compelling impact. Today, with the teachers and headmasters of the government schools, even those in the remotest regions, using the app extensively, data collection and tracking has become a lot easier.  In fact, more than 4,000 government school teachers use the PDLD application to evaluate writing, learning and comprehension skills of the students. .

Another area of impact has been enhanced transparency, accountability and ownership among the teachers, government officials and partners towards the programme, primarily driven by the programme-related data being made public.  Also, the open access has led to a healthy competition between schools with the performance of schools openly available for review and comparison.  The programme has also helped to identify geographical areas and schools where the performance has been low and initiate corrective intervention. Interestingly, the PDLD programme has led to increased enthusiasm among students to learn and explore academic concepts, thanks to the introduction of child-friendly pedagogical practices.

The website and app have also evolved to become critical feedback and grievance redressal mechanisms, as they provide a common touchpoint for the teachers to interact with the government.

Being known for development, not the lack of it

An initiative of this magnitude would have necessitated extensive investment – be it in technology or hiring personnel. But the District Administration of Dantewada chose to indegniously engineer and pilot a solution that today can be a blueprint to address similar educational challenges in remote places where infrastructure, internet connectivity and access to a ready talent pool can be a big challenge.

The Padhe Dantewada Likhe Dantewada initiative has shown how low-cost user-friendly technology initiatives can indeed improve the reachability and effectiveness of government interventions.  The district once infamous for Naxal violence and its poor performance in socio-economic indicators, is increasingly taking the lead as a change agent.

Who designed the PDLD app?

Were there any additional measures taken to tackle malnutrition other than organising periodic health camps?