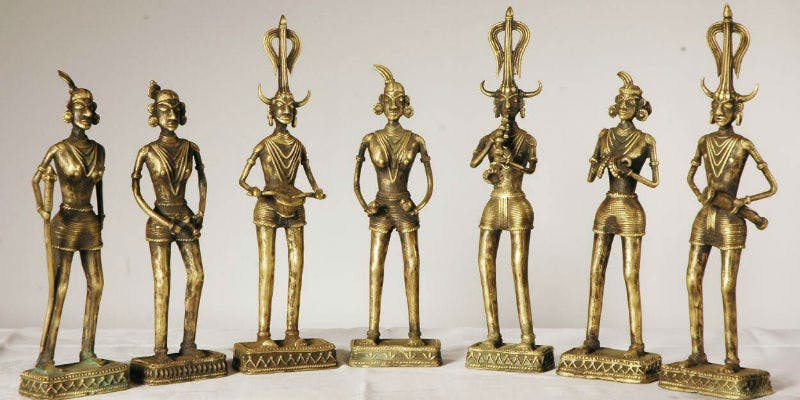 Remember the famous Mohenjodaro Dancing Girl statue from your middle school history books? While you may recall the figurine for its portrayal of confidence and swag, it is also known for being one of the earliest known examples of an intricate and primitive art form that’s in danger of becoming obscure today.

Tracing back its history to over 4,000 years, Dhokra is a folk art that involves the casting of non-ferrous metal like copper or bronze using the lost wax technique. It gets its name from its main practitioners, the Dhokra Damar tribes who are traditionally metalsmiths. Spread over the eastern part of India, including West Bengal, Orissa, Jharkhand, Dhokra tribals are also found in some parts of Chhattisgarh.

What makes this art form unique is the fact that no two Dhokra artworks are alike, and every single sculpture is painstakingly crafted to be one of a kind. The artisans take inspiration from mythology, the environment and simple rituals, and showcase these through their works. This ancient tribal art is appreciated by art enthusiasts from around the globe.

One of the artworks by Bhupendra’s father, named “Mohaped – The tree of life”, was displayed at the Taj Mahal Hotel in Mumbai. It was reportedly the only piece of art to have survived the 26/11 attacks of 2008. After that, the artwork continues to be displayed, this time as a memorial to all those who lost their lives that night.

Ancient art passed down the generations

Time-consuming and intricate, the Dhokra art form involves making a basic clay model of an object and covering it with wax, before etching on finer details. Thereafter, another clay layer is added which acts as a mould into which hot metal is poured. The metal melts the beeswax and pushes it out to take on the shape of the object.

It is traditionally passed down from generation to generation and requires years of practice to gain expertise. Bhupendra Baghel of Kondagaon District, Chhattisgarh is one such master craftsman who has been crafting Dhokra artefacts for over 30 years. He learnt the art from his father who, in turn learnt it from his father and so on.

Bhupendra has won a number of awards for his craft, including the Madhya Pradesh state award in 2000 and a silver medal at a national level art fest in the following year. In 2016, one of his art works made it to The Museum of Anthropology and Anthology in Cambridge. He has been part of many national and international exhibitions to showcase Dhokra art.

Layer by layer, crafting a legacy

According to Bhupendra, the speciality of Kondagaon Dhokra is that their sculptures can be up to eight feet tall or even more, as against the standard ones that go up to four feet.

The artist starts with an initial base figure made of rice husk and mud, and after this, a layer of alluvial soil is added on top. The artiste then uses sandpaper or a piece of tile to give the figure its distinctive features. At every step, the artiste removes dust using fresh leaves, as even the smallest dust particle can create distortions during casting. A thread made of beeswax is wrapped around the object which is then covered with layers of alluvial soil, coal, termite nest soil and rice husk. These layers are dried one after another. We finally have a mould in which bronze, brass or other non-ferrous metals are put in a furnace and melted. The metal takes the place of the melted beeswax. It can take up to nine days to complete a three-foot high sculpture.

When livelihood takes precedence over art

But life has not been easy for these Dhokra artisans. In recent years, the cost of raw materials like bronze and brass has been steadily rising. Also, rampant deforestation is leading to a paucity in the supply of other raw materials like beeswax and termite nest soil.

While Dhokra artefacts are available on websites like Amazon, the demand for this unique art form is not as high as one would expect. “At times we don’t even get back the money that we spend on going to exhibitions,” laments Bhupendra.

Little wonder then that like with several other traditional Indian art forms, a number of artisans from the younger generations are opting out to choose jobs that offer them more secure incomes.

On being asked if his children are ready to follow his footsteps in pursuing this art form, Bhupendra says, “Of course they are interested. But when your work can’t fill your family’s stomachs, will you actually choose it over something that will?”

The district administration, for its part, is coming up with new ways to popularise and market this ancient art, and a special website which will give the Dhokra artisans an online platform to sell their artwork is in the offing. This is a significant step towards giving this valued folk art form the limelight it deserves, and comes as a ray of hope for artisans like Bhupendra who are willing to do whatever it takes to keep their art and tradition alive.