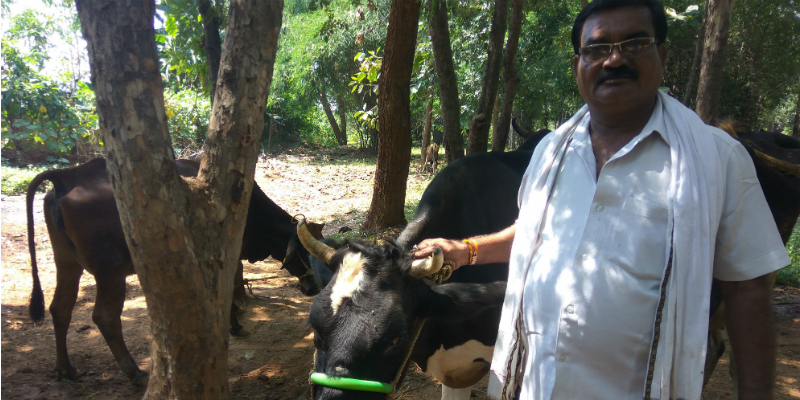 He started milk business with 15 cows, planning to start his Dairy Farm

This story is about a 56-year-old farmer Durjan Singh, living in Jungera village of Balod district. He is the oldest of a joint family of four brothers. Until a few days back this family was also trying to make both ends meet by doing traditional farming on five acres of ancestral land. All four brothers and their wives used to go out to work as daily wagers also whenever needed. But after starting the business of milk with a loan of 12 lakhs from the cooperative bank, they are concentrating on expanding their business. In order to get this business started, the government has given them a grant of 3.9 lakh Rupees.

Durjan is the eldest in his family. The second brother's name is Puran Lal. Then there is Gyanik Ram and the fourth one’s name is Haraknam. Dujan has a son named Dushyant. Dushyant's wife and children also live together with them. All in all, the food of the children and grandchildren of the four brothers is cooked in the same kitchen. It was getting difficult to handle the budget by only cultivating paddy, wheat, gram etc. using the age-old traditional farming methods. Children's education and other expenses were becoming an additional burden. Therefore, everyone thought of doing something new together.

Now they are excited to expand the business. All the four brothers are planning together. Good fodder for Cows has become their priority. Napier grass has been planted in some parts of the five acres of farmland so that the cows get green fodder throughout the year, so that the quantity of milk is never compromised. Ganga Maiya Sahakari Samiti is buying milk from them at Rs 32 per liter. Because of this, their economic condition has also improved. No one in the family goes out to do labour work anymore. Everyone is sharing the load of house and business together.

Durjan Singh says that if they continue to earn as much, then they will soon repay the bank's debts. There is also a plan to purchase more cows in the coming days. He is confident that in another eight or ten years they will have their own dairy and will be conducting the milk business from their village itself.

This must be informed that the milk producers are benefiting from the rate set at the first milk plant set up in Balod district, and the customer is also very happy with the availability of pure milk. The reason is the plant here, which immediately rejects any adulterated milk. Due to this, the quality of the milk is not affected and only pure milk is reaching to the customer. Through the Ganga Maiya Sahakari Samiti, the cattle-keepers of the villages are networking. So far 300 veterinarians are profiting by joining hands.

The best part is that most of the members of the committee and the plant are themselves milk producers and they understand the specialty of this production. Apart from packaged milk, by-products like curd, matha, paneer etc. are also being prepared here. Committee Chairman Anil Kumar says that the profits will increase in the coming days. The number of members will also increase and animal wealth will soon be seen as a property.