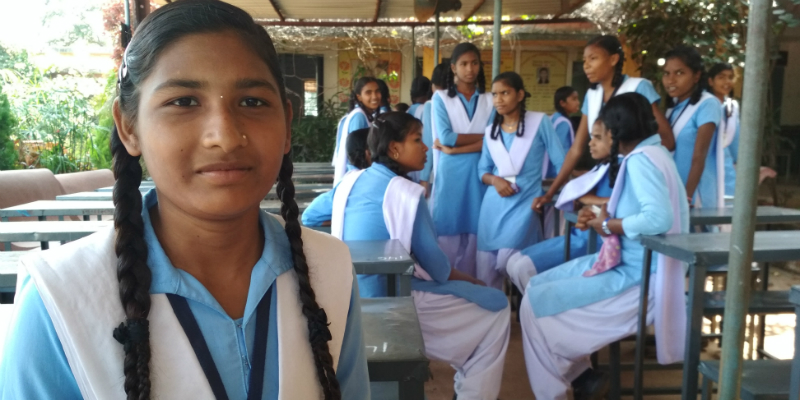 Gamini, is studying in Government Higher Secondary School of Jhalama in Balod district of Chhattisgarh. She is not afraid of anything anymore. Now she wants other girls to become fearless. She wants to join the police and has set a goal of protecting other girls. Balod's Superintendent of Police has impressed her a lot. He used to teach economics at her school and used to give motivational speeches. Many girl students were inspired, one of them was Gamini.

Gamini firmly believes that she can wear a uniform and serve the society and also help girls.11th class student of art, Gamini has great interest in political science, geography, English and Hindi. Before that, when she was enrolled in high school, there was no means of travelling from the village to Jhalmala where her school is situated. Many a times she even thought that she would quit studies, but the government’s Saraswati Cycle Yojana gave her a bicycle and enhanced her interest in studies. Now she is working hard to achieve her goal. Gamini says that she will work extremely hard and have herself enrolled in the police.

It would also help her support her family.

Gamini's father, Hardela Nirmalkar, is a farmer by profession, but he also works as a laborer if there is a requirement of any such work. Her mother Usha Bai works as a daily wage earner and lends her help to Hardela. Sister Durgeshwari is studying in 10th standard. Brother Rajiv is a student of 8th standard. Both love their sister very much and Gamini helps them in their studies too. She wants to study and will also help her siblings in their studies. The Saraswati Cycle Yojana has encouraged her. Initially she was afraid to ride the bicycle on road. But now, she’s more confident in doing that.

To ensure that girls study at least till 12th standard, the Chhattisgarh government has come up with this scheme of providing free bicycle to girls belonging to Scheduled Castes and Scheduled Tribes who are in Class 9th or those above 18 years of age. In order to develop the tribal people of the state and to encourage the students, the education department, together with the tribal welfare department, provide bicycle for free for both boys and girls to continue their higher education after class eight.

There are many girls like Gamini who were afraid of walking to the school from the village, but due to the Saraswati Cycle Yojana, their commute got easier and they are not scared anymore. As a result of such steps taken by the government, the percentage of students leaving school has decreased substantially. The literacy rate of rural women in Chhattisgarh is increasing in India's average literacy rate. Census data shows that the female literacy rate has increased by almost ten percent. With such efforts and plans, we can expect to increase the female literacy rate more in the country.

The number of girls getting benefit out of this scheme are in thousands. Girls need to have cleared at least 8th standard in order to get bicycles for free. The State DEO (District Education Officer) is responsible for providing bicycles for free to the girl students. Only girls belonging to Scheduled Castes and Scheduled Tribes and BPL (Below Poverty Line) families are being provided free bicycles under this scheme.