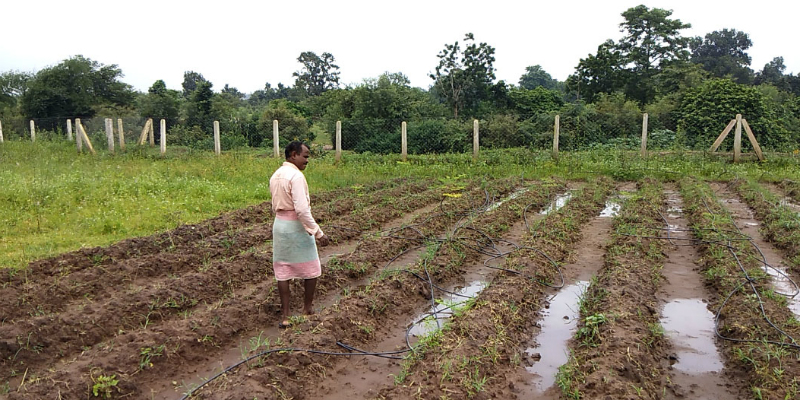 When the district administration officials of Korba district noticed that the tracts of land allotted to farmers under the Forest Rights Act were lying unused, it made them curious. The land was allotted to farmers at the Doomarkachar village at the Pali development block. When they investigated the matter they found that the farmers were not utilising the land because of its uneven topography.

The district administration sprang into action. In the first phase, a patch of 25 acres of land was leveled at a cost of 5.5 lakh rupees. Protecting the crops from animals was another big concern and pole fences were also built at a cost of around 10.5 lakhs. The farmers also faced water crisis at the site. To deal with this problem, bore wells were dug at five spots and dual solar pumps were also introduced along with each bore well.  Initially drip irrigation was introduced in government land of 2.5 acres adjacent to the site. Both government land and private land were made ready for cultivation within just two months’ time. 17 farmer families in the locality are being benefited from the project here. On an average the farmers have reaped three harvests between February and August according to Sandip Sinha,Development Block Officer, Pali. Till now around thirty lakh rupees have been invested on the project and in future the district administration plans to setup processing units too.

The farmers produce various crops like rice, drumstick, vegetables etc. “Earlier farmers were not getting much benefit. They would cultivate only one crop, especially rice. It was not that profitable. Now they are cultivating vegetables and getting more and more benefit out of this project.” Says Rambharos Marawi, village head of Doomarkachar.

Kanhaiya Shyam is another farmer who has benefited from this scheme. He has already reaped three harvests. “Earlier we used to cultivate rice and there was no profit. Now we do vegetables and we are getting profits. I hope the second and third phase of this project also starts soon. It is a boon for us and we are happy about it. We are very enthusiastic about participating in his project. We are also encouraging the farmers who have not yet been associated with this project."

The land that looked abandoned sometimes back now has a completely new look. Various crops growing all over the place with busy farmers toiling hard is the sight one sees here today. The farmers at Doomarkachar are now hoping for a better future and they are beaming with confidence after seeing the success of the project. They are confident of multiplying their incomes with this project and therefore wants it to expand.