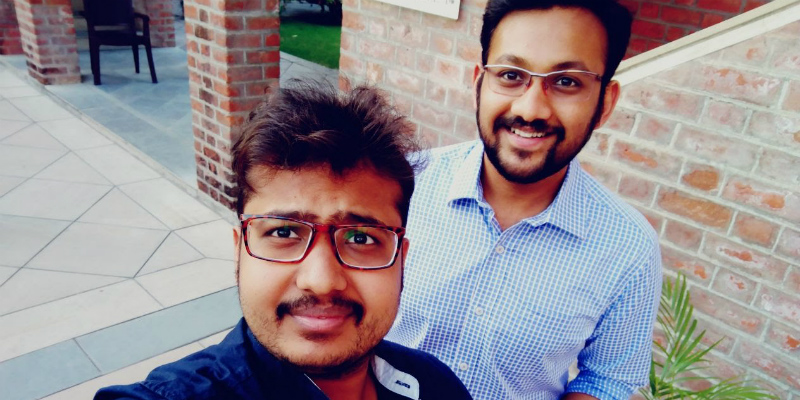 ‘We design beautiful and functional apps that are effective, efficient and solve real problems,’ states the website of SmileBots, a Raipur based startup.

However, Co-founder Achal Agrawal seemingly contradicts this with his statement, “We don’t make apps.” A minute later, he adds, “We create solutions.”

Achal explains, “It’s our core belief that technology must be effective and not just be there for the sake of being there. So when someone comes to us, we first brainstorm and understand if they really need the app that they are asking for. A number of times, after this discussion we realise that their problem could be easily solved by using an existing app. In that case, we don’t make the app for them and instead lead them to an existing app that fits their need. At the outset, it might look like we have lost a customer, but in the process we gain trust. And that’s what is important for us. We want to deliver value, not just work on tech projects or apps.”

The early days: from a college project to a startup

The startup took root in 2012 as a pilot project with the same name when Achal was an engineering student at NIT Raipur. SmileBots was based on the concept of “learn as you do”, a practical problem solving approach to building creative thinking process through Robotics and Mechatronics and providing students with a platform to let their ideas flow freely.

After completing his engineering, Achal took on a promising job at Samsung Research in Noida. Serendipitously, Achal met a school friend, Harshit Agrawal, at a seminar in 2014. Their mutual interest in starting up and the longing to go back to their hometown struck a chord and the duo decided to work on their first product OnEdma. In August 2015, SmileBots was officially registered as a limited liability partnership (LLP) under the name WisdomTree EduTech LLP with the brand name continuing to remain SmileBots.

The two then worked on developing OnEdMa, an e-learning platform to empower teachers to reach out a wider audience of students. Even though the platform had a listing of 600 teachers, the project had to be shelved as it was not commercially viable. The two then worked on developing other home-grown products like NetPractice – a personalised learning platform to help schools and teachers conduct online real time tests and quizzes, and QuizMaster Pro, that makes quizzing fun and high-tech. While NetPractise is in the minimum viable product (MVP) phase, QuizMasterPro is gaining traction and is being used by institutes such as IIM Lucknow for inter- college quizzes, Corporates like Mahindra, Indian Oil, KPMG, Asian Paints and others are also using it for employee learning and engagement.

The hits and misses of developing home-grown products gave the team a new direction. In 2017, SmileBots shifted from being a core product-centric startup to being service-centric and began work on designing apps for client projects – from state governments to IT companies to edtech companies. This includes some really interesting work for LXL Ideas, a global subscription-based learning site for K-12 students and the State Government of Chhattisgarh. However, the team continues to parallelly work on some of its home-grown apps like QuizMaster Pro and NetPractise.

LXL Ideas wanted to send video content to schools across India, without the risk of piracy. Also, there were two key challenges that needed to be addressed – classrooms in a number of schools were not connected to the internet and the operating systems of school computers varied, from Linux, Windows, Mac, and versions of these.  SmileBots designed a Digital Rights Management solution called MediaLock to help LXL Ideas distribute their audio/video content without having to worry about unauthorised copying and piracy. Through MediaLock, LXL can send content to schools irrespective of the operating system they are using. Since it works with a one-click encryption and on-the-go decryption, the whole process become transparent for the end user, resulting in optimum user experience. The team started working with LXL Ideas in September 2017 and two months later they were able to pilot and test MediaLock and now are in the process of deploying the solution in 500 schools across India working with LXL Ideas.

Another interesting project was creating an AI Expert System to help beneficiaries of the Sanchar Kranti Yojana (SKY) Project of the State Government of Chhattisgarh.  It was observed that several citizens couldn’t avail subsidies or the benefits of welfare schemes that they were eligible for because of an information gap. The solution to this was providing targeted information about government schemes to eligible citizens.

Though seemingly simple, the SmileBots team had to design a solution to surmount practical challenges such as limited storage memory of 4GB, limited computation and battery power, flaky internet in rural areas. With these limitations in mind, SmileBots designed MoreMittan, an AI-powered app just 4MB in size that works offline and updates information on government schemes whenever an internet connection is available and stores this information locally. Some of the key features of the app is that it facilitates login from multiple profiles on a single smartphone, since multiple family members may use the same smartphone to avail different schemes, an audio to text feature which enables people to use the smartphone without any hassles of typing and recorded audio notifications. In addition, the app also keeps track of the application process (whenever a beneficiary applies for a scheme) and keeps the user updated on the progress. The app has been designed in Chhattisgarhi to make it easy for rural citizens to use it. A key feature of the app is that it is AI enabled, which makes it intuitive to the needs of the user.

Talking about the highs and lows of SmileBots and today having successfully delivered some impactful client projects, Achal says, “Today, having launched, maintained, failed and succeeded with multiple products of our own, we know the drill.” He admits to having made many mistakes on this journey – creating the solution before validating the market, not listening to the customers enough, focusing on the wrong segment etc., which led to challenges in retaining customers, getting app downloads, customer disappointment, scaling, and so on. “So when a startup, MSME or any other client comes to us, we understand their problems because we have been in their shoes.”

Having recently transitioned from being a product company to a service one, Achal says their current focus is to put in place a clear process roadmap for the team which will help them scale effectively. “We are also fine-tuning our market positioning and strategy,” he adds.

Rooting for Raipur’s growth as a startup hub

SmileBots is recognised as a startup by the Department of Industrial Policy & Promotion (DIPP) and is now being co-incubated at Raipur by Mobile10X and 36Inc. Sharing how getting incubation support on home turf is helping the startup, Achal says, “A thriving supportive community is essential to startup growth. And, with help from 36Inc and Mobile 10X, we have been able to drive momentum on this growth. We get connected to industry experts and if not for 36Inc and Mobile10x, we would have to fly down to startup hubs like Bengaluru or Hyderabad just to connect with them. It’s amazing how we are able to leverage all that and more right here in Raipur now.”

Talking about the growth of Raipur as a technology and startup hub, Achal says, “Today, there are various government-enabled incubation support and policies which are helping the startup culture grow and flourish. With more and more people starting up in the state, mutual support and growth is also becoming the new norm. Now we are able to see some very interesting startups based in the city.”

A startup that took time to find its market offering, after many trials and a few wins, has now found a firm footing. In turn, this has brought in recognition via startup contests and awards. SmileBots was featured at the Bihar Innovation Conclave, and their work covered in leading national dailies such as Times of India, Dainik Bhaskar, Patrika, Amrit Sandesh, as well as local dailies. They recently won the “Blockchain for e-Governance Challenge” conducted by the Chhattisgarh Government for Land Records. Achal also received a scholarship from Swades Foundation for IIIT Bangalore’s Data Science Executive Program - for which 40,000 people apply every year.

Reaching these new highs is giving the SmileBots team more reason to be happy!