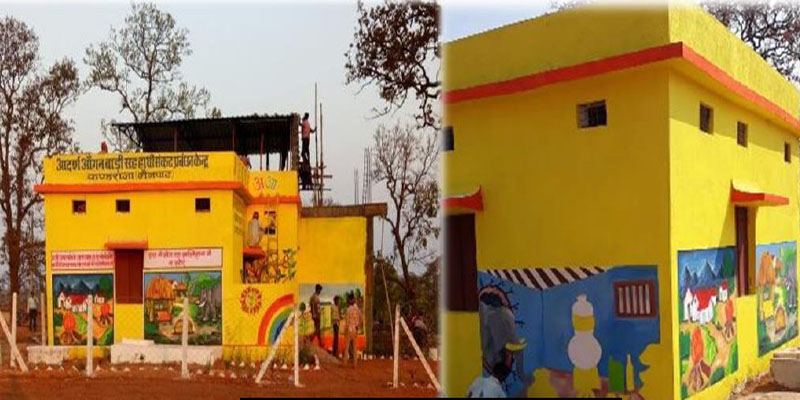 Man-elephant conflict has been a major cause of concern in the Surguja district of Chhattisgarh. 117 villages of Surguja district are on Elephant corridor. People in these areas are, therefore, constantly under the threat of attacks from the pachyderms. These conflicts result in loss of property, destruction of crops and even loss of human lives.

After every such conflict, the district administration would take up repairing work of the destructed houses in these areas. However, repeated destruction of these structures by the elephants rendered the entire exercise futile.

To protect people’s lives and their property and crops, the district administration decided to take an innovative step. Two crucial interventions were planned and implemented. Rather than repairing destructed houses, the administration decided to relocate the villages most effected by the conflict.Funds for rehabilitation and relocation was rooted from Pradhan Mantri AwasYojana and relief fund. Also, other amenities at the new settlements were provided through convergence of various schemes. For example, construction of roads and road side plantations were managed through MGNREGA, solar powered overhead water tanks were installed through CREDA etc. Though the families relocated to the new settlements were feeling safe,the administration did not want to take chances and therefore the new settlements were further fortified against probable elephant attacks.

Elephant Protection Trenches (EPT) were constructed in the areas where there was high probability of man-elephant conflict. A total of 2.2 KM trench was constructed around Kandraja village which was funded through District Mining Fund. The EPT reduces the conflicted because the elephants cannot cross it.

However, it was not possible to rehabilitate the inhabitants of all the 117 villages. To address this issue Anganwadi cum Elephant Crisis Management Centres in all the 117 villages were formed. These centres are of 18 feet height which is at least 6 feet more than the height of an elephant. To scare away the elephants, these centres are surrounded by blinking lights and sirens. On top of the centre a shed is made so that in case of an elephant attack, villagers can take shelter on the roof. Further, every centre has been provided with an Elephant Protection kit. These kits contain following items:

Blinking light with siren: A tool combining blinking lights and siren was constructed locally to scare away the elephants.

Pen Drive with audio tutorial: The tutorial is on Dos and Don’ts during elephant attack.

Sound system with mike: Tutorials can be heard on these speaker systems. These are helpful to inform people regarding elephant attack.

In addition to above items, drums, torch, whistle, iron box, back pack, track suit etc. are also provided in the elephant protection kit. This kit is kept under the custody of Anganwadi worker.

In addition to these, 10-member elephant volunteer teams are being trained for each centre. These teams are responsible for safe evacuation of people from their homes. In the first phase, 38 centres are being developed as Elephant Crisis Management Centres. In the second phase, rest of the villages will be taken up.

This innovative step has decreased the man-elephant conflict to a large extent and the villagers in the elephant corridor are now feeling safe.