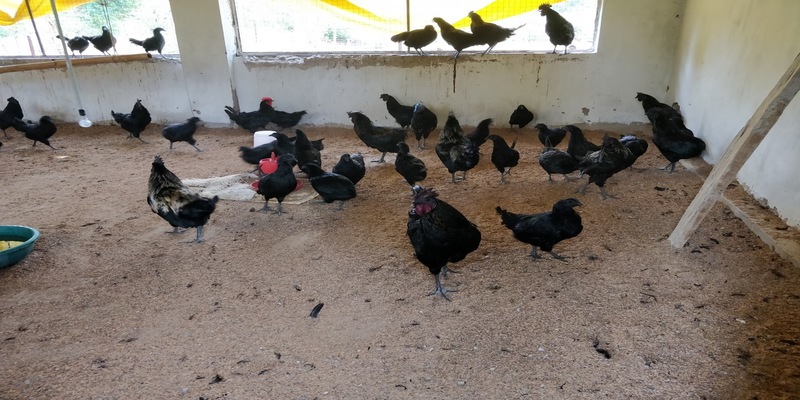 Foodies across India are falling in love with the ‘Kadaknath’ chicken, and areas that breed this variety are seeing gold. Consider this – one Kadaknath egg sells for Rs 70, and a chicken for Rs 900.

Kadaknath chicken is famous for its taste and claimed aphrodisiac and medicinal properties. The blood, meat and body of the birds are black, and compared with other poultry, Kadaknath is high in protein. It also contains 18 kinds of essential amino acids and Vitamins B-1, B-2, B-6, B-12, C and E.

The Kadaknath species has not only opened up palates, but have become a major source of income for women in self-help groups in Chhattisgarh’s Dantewada district, but are helping them gain financial independence. Many say they have successfully paid off outstanding debts, and have also been able to buy their own agricultural equipments.

Ratna, a poultry farmer from Dantewada, who has been part of one such self-help group for the last three years, says she was given training by the Internal Community Resource Person (ICRP), where she learnt to breed and take care of the chicken. She happily says rearing Kadaknath chickens has helped her earn a steady income for her family and she can now better provide for her children.

The process of breeding the Kadaknath is long - eggs are kept in a setter machine for 18 days, after which they are kept in the hatcher for another three days. Special care is taken to ensure the chicken in farms in the region are healthy.

Apart from Chhattisgarh and Madhya Pradesh, poultry farmers in Maharashtra, Tamil Nadu and Andhra Pradesh have also been breeding the chickens. As of now, locals from both Madhya Pradesh and Chhattisgarh are making lakhs or rupees every month with sales of Kadaknath chicken and eggs.

Madhya Pradesh claims the origin of the Kadkanath chicken is in Jhabua district. The state claims it established the first chicken care centre for this species in 1978, and that the tribals of Jhabua breed the chickens of this species. It thus applied for a GI tag for kadaknath Chicken.

The GI Tag Registry office, while accepting the Madhya Pradesh government’s application for Kadaknath chicken, issued a notice seeking any objections. This is when Dantewada district administration, with the help of private company Global Business Incubator, presented its claim on the meat.

Srinivas Gogenieni, the director of Global Business Incubator says the Kadaknath of Dantewada is much better, and weighs more than the chickens from Madhya Pradesh. There are more than 160 poultry farms in the Dantewada district alone that produce about four lakh Kadaknath chicken annually.

To support its claim for the GI tag, the Chhattisgarh government claims Kadaknath is naturally bred in Dantewada.

This story is an example of how, with support from the government, people in rural areas can earn a livelihood and promote a healthy substitute for the end consumer.