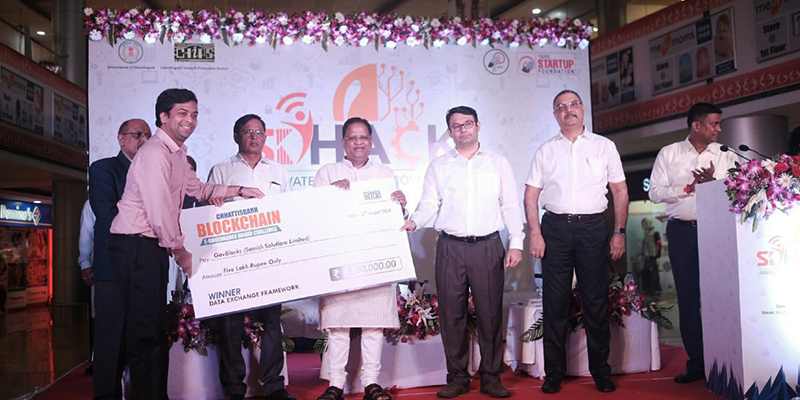 The landscape of public service delivery is undergoing a radical transformation with the advent of emerging technologies, such as Blockchain, that are offering a way to resolve issues of trust between stakeholders in a transaction. At the same time, it offers preservation of data, which could become key to bringing accountability to the data holders, and it also ensures real-time updates at critical points. In fact, Blockchain has been touted as the next big revolution after the internet itself.

Given the potential of such a technology and the speed at which it is being adopted, the state of Chhattisgarh is actively seeking to leverage the advantages this technology brings. In the last two years, the IT nodal agency of Chhattisgarh, CHiPS (Chhattisgarh Infotech Promotion Society), under the guidance of Mr Alex Paul Menon, CEO, and Joint Secretary, Department of E&IT, Chhattisgarh, has taken bold initiatives to deliver proactive e-governance to the citizens of Chhattisgarh. A pilot in identity management was completed by CHiPS in collaboration with experts in 2017. Similar projects are being initiated in e-Health records, Land records management, etc., which CHiPS is doing in collaboration with NITI Aayog. Chhattisgarh is following the example of countries like Estonia, a relatively young country that has made great strides by actively embracing of emerging technologies to deliver public services.

“CHiPS has been at the forefront of exploring emerging technologies. We are already working with NITI Aayog, and also with a number of global experts who have taken a keen interest in collaborating with us to come up with the best ideas for the state. The Blockchain Grand Challenge stands as a testament to this effort, said Alex Paul Menon, CEO,CHiPS".

As a concrete step in exploring the potential of Blockchain technology, CHiPS organised ‘Chhattisgarh: Blockchain for e-Governance Grand Challenge’. It was an event that lasted for more than a month, witnessing participation by 118 candidates for four use cases from multiple countries from India, the UK, the US, and Australia. The Challenge was open for global participants to ensure that the best experts and talent was attracted to help leverage this emerging technology. The candidates were given intermediate tasks, and were judged by a panel of technical and functional experts.

The event took place on 8th August 2018 and the results were declared next morning. The prizes were distributed on 27th August, by Hon’ble Minister Amar Agrawal of Government of Chhattisgarh. The winners were:

Mr Alex Paul Menon formally addressed the event, and was one of the judges. Genevieve Leveille, founder and CEO, Agriledger, UK, whose work in Blockchain technology is globally well-renowned, had attended as one of the technical judges and also addressed the attendees. Rohas Nagpal, Chief Blockchain Architect at Primechain Technologies, who is now working with Indian banks to test Blockchain solutions, was also a technical judge. Each of the four panels of judges comprised technical experts, functional experts from their respective domains, and government officials.

The full-day event was organised by giving four use-cases with the finalists being shortlisted after a series of intermediate tasks – data exchange between departments, e-health records, land records, and an open slot where the participants were asked to submit their own problem statements and solutions. The first use-case of ‘Data Exchange Framework’ sought to develop a platform where different state departments could be onboarded to enable seamless but secure exchange of data that would also bring in accountability to the data holders. Digitised e-health records are inherently sensitive in nature and thus would need maximum security and privacy to be embedded in the solution. Blockchain technology could enable this seamlessly. Land records management has been a classic use-case of Blockchain with some countries like Ghana having completed pilots, and Republic of Georgia already migrating land records to the Blockchain platform. The open innovation use-case saw submissions in a range of diverse domains as well.

The implementation for the winning projects will happen through pilots with respective departments (E and IT, Health, Land).