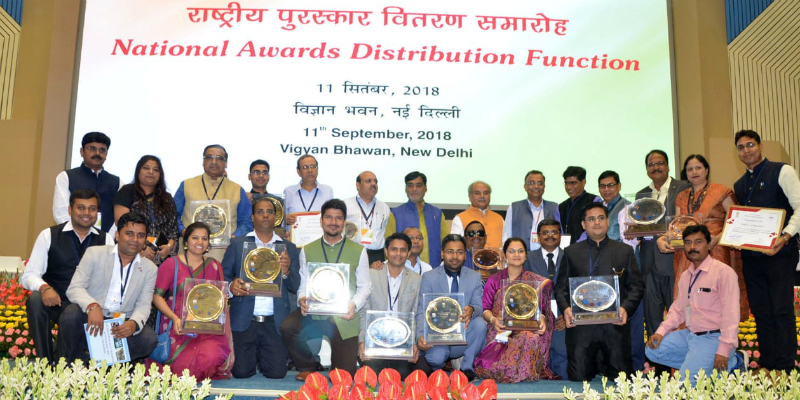 In the prize distribution ceremony, the officials said that under the Pradhan Mantri Gram Sadak Yojna (Chhattisgarh), the state was awarded with a special award for building different roads stretching over a total distance of 1700 Km under difficult circumstances in the Naxal affected areas and gave a 12-month connectivity to the remote areas. He said that under the Pradhan Mantri Awas Yojana (Rural), the state was given six awards in five categories. Chhattisgarh's performance in this scheme was the best in the country. For this, the state was honored with the first prize. Under the scheme, the second prize was given to the Kondagaon district of the state and the third prize for the district of Dhamtari in the best district category. In the Prime Minister's Gramin Awas Yojana, Sarangarh Development Block (district-Raigad) got second prize at the level of development blocks in the country.

Officials said that under Pradhan Mantri Awas Yojna, Chhattisgarh State has been awarded second prize in rural state mechanization training and first prize for foundation seeding in Management Information System. Officials said that on the basis of excellent work under the Pradhan Mantri Gramin Yojana scheme, Chhattisgarh has been given the target of constructing pucca houses for a total of 7,88,000 poor families in three years during the year 2016-17 to 2018-19. Out of these, four lakh houses have been completed in the first week of September. On this occasion, it was told that Prime Minister Shri Narendra Modi, about two and a half years ago, had launched the Dr Shyama Prasad Mukherjee, Rurban Mission nationwide on February 21, 2016 in village Kurrubhath (Vikas-Dong-Dongargarh) in Rajnandgaon district of Chhattisgarh for providing basic amenities to the villages.

State Chief Minister Dr. Raman Singh expressed satisfaction on Chhattisgarh receiving 15 national awards together under various central schemes. He said that this is a glorious moment for the state. Dr. Singh said in Raipur that the state has done a great job in these central schemes related to the betterment of the village, the poor and the farmers. Dr. Singh congratulated the officials and employees associated with these schemes related to the Panchayat and Rural department as well as the minsiter Shri Ajay Chandrakar.