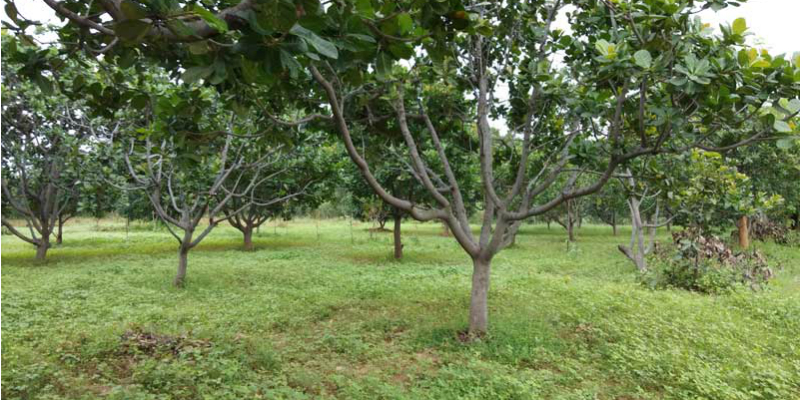 Cashew farmers and a new agricultural revolution in Jashpur district

The main occupation of majority of the people in Jashpur district of Chhattisgarh is agriculture. The farmers here have been growing various crops since a long time. Rice and vegetables are the main crops that have been grown here traditionally. Of late, farmers have been encouraged to take up the farming of new crops. Cashew is one such crop that a lot of farmers have taken up. The farmers have been successful in reaping benefit out of cashew farming and it is gradually growing more popular among them.

It all started about five years ago when some farmers started to grow cashew with the help of some government schemes. Within five years the plants grew and started yielding fruit. Though they were successful in growing the cashew fruit, they were not getting a good market for that. The middlemen were buying the cashew kernels for 50-60 rupees per kilo. Three kilograms of kernel would yield one kilogram of the edible cashew which would sell for around eight hundred rupees per kg. The entire market for the cashew kernel was completely unorganized. The farmers were mainly dependent on the brokers and were exploited completely.

To deal with the situation, the administration decided to intervene and devise a road map to help the cashew farmers get a get a proper price for their produce. A few other local organisations were also roped in to address the issue and a committee was formed. With funds from the district mineral fund, a cashew processing center was set up in an abandoned school building. A Farmers Producers Organisation was formed with all the farmers as member.

The processing unit has helped the farmers to a great extent. Their profit from cashew farming has increased manifold. It has changed the quality of life of the farmers. The cashew produced here is packaged and branded at the processing unit. It is helping the administration to create a cashew brand named Jashpur Cashew. Jashpur Cashew is gradually becoming popular in the market and it is hoped that it will soon be able to gain a nationwide market.

The success of cashew farmers has prompted other farmers to take up cashew farming as well. Earlier, many farmers were reluctant to grow cashew as they were not familiar with it and they were apprehensive of the effect of cashew plants on their land. Some people were even scaring the farmers that it is a conspiracy by the corporate to grab their land. Now the approach has changed. The farmers who were earlier scared of growing cashew are now showing interest in it. The farmers who have already made large profits from cashew are also encouraging others to take up cashew farming. The administration hopes that cashew will soon become an identity of Jashpur.