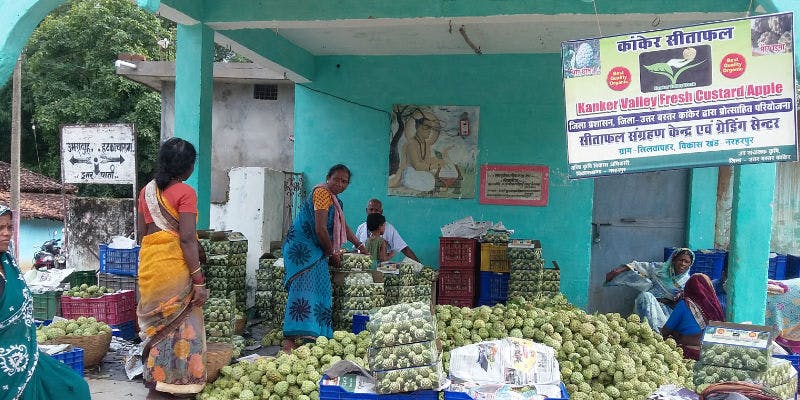 Agriculture fairs or fair-trade exhibitions hosted by social enterprises or governments are often the best places to experience authentic local flavours of a region, including fruits, vegetables and food items such as papads and pickles. And, the custard apple ice cream from Chhattisgarh’s Kanker district is a new favourite at these fairs.

The story of how this ice cream came into being becomes even sweeter, considering that Kanker was once a Naxal hotbed, drought-prone, and economically and socially lagging behind. The movement to harness locally grown and locally sourced produce and turn it into a locally manufactured delicacy has helped bring about a positive transformation in this region.

Like many rural areas in the country, unemployment was major issue in Kanker. People complained that the administration wasn’t doing enough for them, while the administration said there was lack of openness to new ideas and commitment from the residents. But when former District Collector Shammi Abidi took charge in February 2015, she made an honest attempt to device a solution that could be adopted by the people, with minimal resistance or the requirement to upskill.

Geeta, a village resident and an active member of a local women’s self-group, says, “The District Collector met us, spent time a lot of time understanding our problems, the circumstances we live in and everyday life in the village.” The free-wheeling talk unearthed an interesting insight – for the people of Kanker, custard apples, which grew in abundance in the forested areas around them,weren’t an exotic fruit, and neither did they impart any commercial value to them. They used the fruits from the low-maintenance semi-deciduous tree for household consumption, or sold them in local markets at throwaway prices. They never considered it as a cash crop.

The idea of generating employment by capitalising on the commercial value of custard apples and to further create products and by-products from it, was thus born.

The agriculture department was assigned to work on transforming the idea into an actionable plan, which saw the emergence of a brand– Kanker Fresh Valley custard apples. The plan was soon extended to include a locally made custard apple ice cream.

With the plan chalked out, it was time to implement it which called for upskilling and training the villagers in the most practical and sustainable way possible. The District Agriculture Department and the Collector’s office decided to device learn from the success stories of Buldana and Nagpur, two key agricultural hubs in Maharashtra known for their distinctive large-scale quality agricultural produce and a high concentration of agri-based industries and agricultural colleges.

Officials from Kanker district visited these regions and got insights into crop cultivation, logistics and supply chain requirements, scientific methods of cultivation as well as key learnings for long-term upkeep of the custard apple trees. After returning to Kanker, they trained the farmers and helped them register as a co-operative society. Interestingly, 80 percent of the farmers who registered were women. In a matter of months, the district had 750+ farmers harvesting custard apple commercially and an additional 400+ people assisting in the supply and value chain. While a large part of the harvest comes from the custard apple trees in the wild, the farmers have also begun planting the trees in their farmlands.

The district administration also took a step ahead in enabling the trained farmers benefit from the programme by distributing 2,000 baskets free of cost to help the farmers transport their produce with minimal damage. In addition, the department has also distributed fridges and packaging boxes to these farmers. During the harvesting season, farmers are able to harvest 25 to 30 kg tree and are able to earn Rs 50 to Rs 60 per kg, on an average.

Being a seasonal fruit, custard apples are harvested from September to November. That means it is imperative for farmers who depend on the crop for sustenance to capitalise on the seasonality and also preserve it to meet the market demand during the off-season.  The farmers of Kanker have understood this basic requirement and soon after the harvest in October, they extract the pulp and preserve it in cold-storage, and thus continue to earn even post-harvest season. And, it is here that the district administration’s plan to engage the local women self-help groups to manufacture custard apple ice creams have reaped two-fold dividends. Not only does this provide a sustainable and dependable market for the custard apple pulp throughout the year, it also makes the women of the region financial independence.

It’s a busy day at the ice-cream making unit housed at the District Agriculture Department’s office. Women in sarees wearing hand gloves and head caps can be seen engaged in different processes – blending the pulp with other ingredients, pouring the thick creamy mixture into moulds, packaging the ice creams. The ice creams are then distributed to be sold at local fairs in Kanker as well as fair trade events across the country. A number of self-help groups have found employment opportunities by taking collective responsibility of running and managing the ice cream making unit. These locally-made custard apple ice creams are a current favourite in the region and sold for a price of Rs 20 for a 100 ml pack.

The story which began in 2016 has grown in strength and positivity year-on-year.  Today, Kanker has shown that it is possible to sustainably harvest from the forests as well as successfully take up commercial cultivation and engage in value-addition activities to provide viable employment opportunities.

Kanker has given the other districts in the state a success formula to emulate, going on to show how a well-designed programme, proactive support from the government and commitment and hard work from the people can truly bring a positive transformation even in the most trying circumstances.