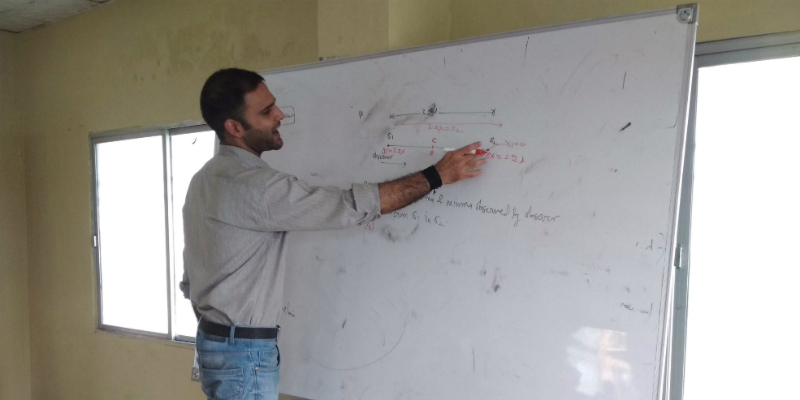 After earning a post graduate degree in M.tech under manufacturing and material engineering, he chose to teach

Kanpur's IITian Devesh Chaubey. Devesh, who coaches the children of government school by joining the Janjgir-Champa's 'Aakanksha' coaching centre, considers it to be a social service. He says that every student is special. What’s required is to carve them into something meaningful. That's what Devesh is trying to do. He is trying to give something back to the society. Many of his friends who studied with him are working in multinational companies, but Devesh is happy doing social service.

There is a small village named Bad near Mathura in Uttar Pradesh. Devesh's father SK Chaubey used to work there in the railway station. There were a total of 100 people who’d be staying in the colony. That is where Devesh started studying. He studied from 10th to 12th while living in the village. He then, Passed the competitive exam for engineering studies. He scored 2000th rank in UP. He got admitted in BIT College of Jhansi. Worked hard and completed his B.tech in 2014 and then he tried for IIT. His hard work got him success when he joined IIT Kanpur in 2016. There he achieved a master's degree in manufacturing and material engineering.

After studying engineering, Devesh joined the Motion Education Academy in Kota. That's where the process of teaching physics started. Devesh says that by collaborating with the company, eight IITs are not working here as teachers, but doing social service. The children here have the ability to achieve great heights.

Pichor is a small village in Shivpuri district of Madhya Pradesh. This is the paternal village of Devesh. They have their land here. His grandfather and great grandfathers used to work as farmers. After securing a job in the railways, his father started living in Bad. While studying in school Devesh wasn’t aware of B.tech or M.tech. He had accepted the fact that after finishing BSc, he would become a teacher. That was the last and final destination that he used to foresee. That’s the only reason why he chose teaching as a profession. Today, he is teaching the kids of the village. He is guiding them. He feels relaxed when his students ask questions from him. He gets a positive feeling that his knowledge is being used by someone.

The Aakangksha coaching being run in Janjgir-Champa is beneficial for the hardworking people. Such facilities weren’t available back in the days. Today Chhattisgarh Government is providing coaching free. It is bearing the cost of the hostel. Boys and girls have separate hostels under the Aakangksha project in the District Panchayat campus. Apart from studies, their health is also being taken care of.

Devesh says that there used to be the tradition of Gurukul in the ancient days. Children used to stay away from their parents. This tradition has taken concrete shape through the Akangksha coaching. Every Sunday the parents come, meet their kids and leave. Even the teachers live in the hostel with the students. He has informed every child that whenever they have any about, they should ask him immediately. The children here are very talented. He believes that this time a lot of students will secure admission in engineering and medical colleges.

Devesh says that he is the eldest in his family. He has a sister and a brother. He inspires his siblings to study hard for engineering and medical. Today, his family lives in Agra and he is away from them. But, after meeting the children of Akangksha, the distance seems insignificant. This is his family too and he tries to give his best there.