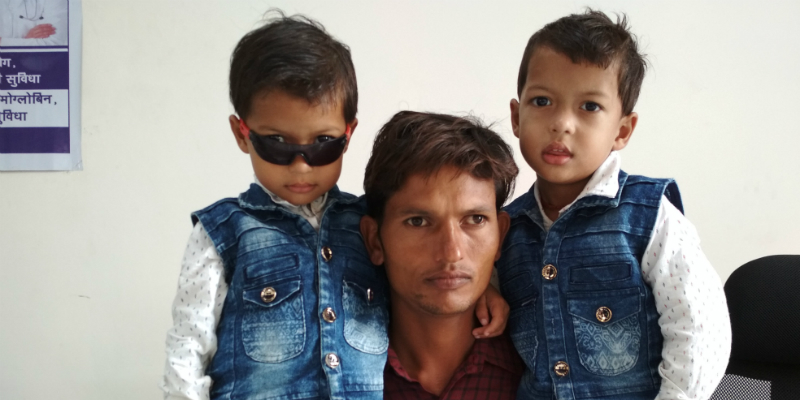 After a cataract operation, Sankalp has a normal life now

Pran Khaira is a village in Kawardha district of Chhattisgarh. Poonam Chandrakar and his wife Madhu have four children. The first two girls are Molly and Rakhi. After them twin sons Siddhanth and Sankalp were born. Of these, Sankalp had cataract. Initially the family members did not know about this, but after being diagnosed, there was an operation at Shri Ganesh Vinayak Eye Institute.

At first the twins looked normal, but as they started growing, Sankalp’s problems began to appear. He would walk for a few miles and suddenly fall. He seemed to have started behaving strangely. For a few days, the villagers considered it a mischief, but when the problem increased, they got worried. One day, Poonam and Madhu took Sankalp to the doctor at the First Referral Unit at Damapur. They informed the doctors about his strange behavior. After this his eyes were examined. Cataract was detected. The doctors at Damapur advised them to go to Raipur and take treatment.

After this, Poonam got information about the CCC mission. In order to get his son treated, he researched about the scheme. After getting approval from the government, there was an operation at Shri Ganesh Vinayak Eye Institute. During the operation, Poonam and his family were very worried, but as soon as the doctors declared that they were successful, they were extremely happy. They thanked the initiative of Chief Minister Dr. Raman Singh and said that the poor family could not have been able to bear the expenses of such an operation. This mission is a lot of help from the Government.

There are more cases of cataract in Bobalda and Pundari of Kabirdham. The reason for this is the lifestyle, environment, etc. for some people, it is also a genetically induced disease. Similarly, there is clubfoot, in which the child's legs are folded in a weird fashion and cleft lip i.e. children have chopped lip and palate. Keeping such matters in view, the Government launched the CCC Mission. Camps were put in hospitals and such cases were taken seriously. According to government data, out of 82 cases of cleft lip, 62 have been treated and 20 are yet to be treated.

151 cases of folded feet showed up. So far 114 people have been treated and 37 people are undergoing treatment. There were a total of 2000 patients with cataract. Doctors operated 1148 patients and gave vision to their eyes. Pending 852 treatment will also be done soon. In this way, the government has shown readiness in the CCC mission.

Like Poonam, there are many other families in the villages around Bodla, Pundariya etc., which are happy because of the mission. After seeing Sankalp, other people of Damapur and Pran Khaira also praised the Government's mission. They say, “The poor families have food and beverages, but they do not have the understanding of the diseases and money for its treatment. The government has achieved a great deal through this mission. This will get the blessings of the poor people.’’