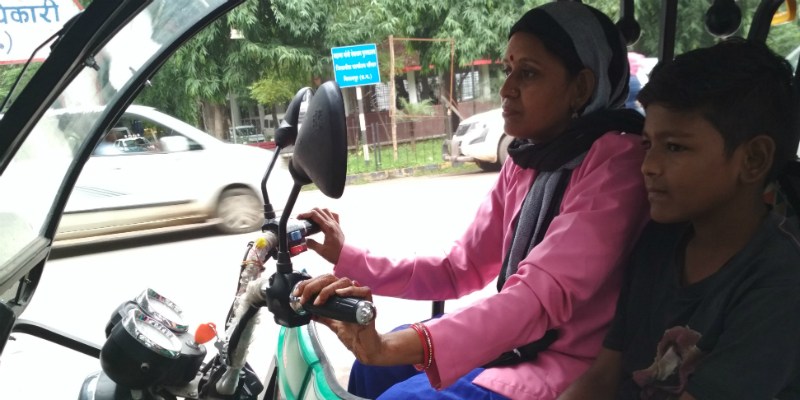 Abandoned by husband, worked as domestic help, Santoshi is now working as an e-rickshaw driver and earning five times more

Santoshi is well aware, how difficult it is to struggle and raise your children in adverse situations. Santoshi Chandra, lives in Bilaspur, used to work as a cleaning lady in government offices and earn 80 rupees a day. Today, she is the owner of an e-Rickshaw. She earns 300-to-500 rupees daily. Now she can dream of a good education for her children and their better future.

Santoshi’s husband left her fort another woman. Her economic conditions worsened day by day. At least the government would give them rice to eat. By whatever little she would earn by working as a cleaning lady in government offices, she would only be able to fulfill the moderate requirements of her family, but there were bigger and more important needs too. She had to somehow manage the clothes for her four small children and the things that they would need. Thinking about making the ends meet would make Santoshi worried. On top of it, she owed money to the local shopkeepers for buying stuff for everyday needs. There would not pass a single day when she didn’t think of doing some kind of work that would improve their economic condition. If her income increases, only then her children will be enrolled in good schools. And only then she will be able to bring her children their favorite things.

Before going to work every morning, Santoshi would make a resolution of starting something new. After returning home from work, she would think of all the advices she had received the entire day from various people. But she could not come up with a business idea that would give more returns in lesser investments. One day while working in the government office, she came to know about the e-rickshaw Yojana. She listened intently and after she had gathered the full information, she sought advice from few of her acquaintances. Some people said rickshaw driving is not a woman’s job. But Santoshi was determined. She wanted to increase her income. And now, nothing could stop her. He was quick to take advantage of the scheme and got an e-rickshaw.

As Santoshi's earnings increased, her husband once again tried to take possession of her earnings, but by now her confidence was touching the sky. She did not fall for her husband’s trap and told him to back off as now she could take good care of her kids all by herself. Today Santoshi is taking care of herself. She is running the family. She is raising her children well, and is also conducting her responsibilities well. She says that her family is happy with the government’s help and so is she.

There are many women who are struggling with financial hardships and have availed this scheme of the government and have become self-dependent. Several e-rickshaw drivers are seen around the Vivekanand garden of Bilaspur, Deendayal Garden, Energy Park, Memorial Forest, Traffic Park, Bilasa Tal etc., and all of them have been able to achieve it because of government assistance. All of them are working hard and are dreaming of a better future. These people say that the only thing they expect from the government is that it efforts will eventually improve the quality of life of the people. And Dr. Raman’ government is running such schemes.

For those people who want to increase their income by doing some business, the state government has come up with the e-Rickshaw subsidy scheme. Under this, subsidy up to 50,000 rupees is being provided from Labour Department on the purchase of e-rickshaw. Under the scheme, the state government bears one-third of the total cost of the e-rickshaw. This will also benefit the economically weaker rickshaw pullers.